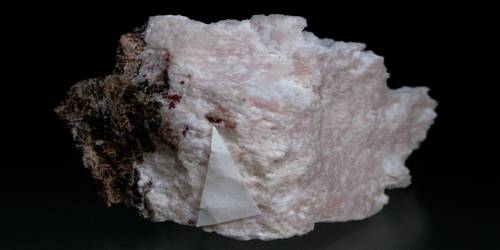 Laplandite has a general formula of Na4CeTiPO4Si7O18•52O, and is found primarily in igneous rocks. This silicate mineral has been found as inclusions in pegmatites, primarily in the Kola Peninsula in Lappland, where the mineral’s name gets its origin. Because of Laplandite’s sodium solubility, it has been designated as a candidate for extracting soda from the rocks in which it is found.

The shape of the crystal is bipyramidal and is similar in structure to olivine or aragonite. This property can give the mineral very distinct colours when viewed under cross-polarization. Laplandite is orthorhombic, which states that crystallographically, it contains three axes of unequal lengths that all intersect at 90 degrees, perpendicular to one another. It has three different indices of refraction, which are measures of the speed of light in a vacuum divided by the speed of light within the mineral, determined individually on each axis.

Occurrence: In the natrolite zone of pegmatite in a di®erentiated alkalic massif.

This readily soluble mineral has given geologists clues about the history of the source of the parent rock, as water-soluble minerals do not form near surface temperatures and pressures.  Also, the formation of this type of chemical assemblage is commonly located near phosphate and rare-element deposits, giving it another important characteristic as a good indicator of where more economic minerals can be found.

Under the microscope, this mineral has moderate relief, which describes the contrast between Laplandite’s refractive index and the refractive index of the mounting medium on which it is placed. The relief can be seen physically as how easily you can see the boundary lines of the mineral under plane polarized light in a petrographic microscope.