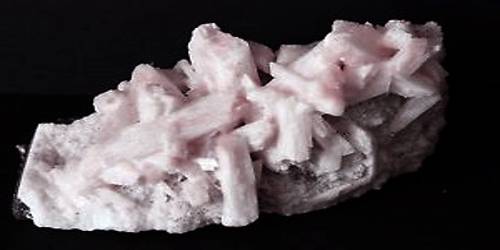 Laumontite is a mineral, one of the zeolite group. It is a white monoclinic mineral consisting of a hydrous calcium and aluminium silicate. Its molecular formula is Ca(AlSi2O6)2·4H2O, a hydrated calcium-aluminium silicate. Potassium or sodium may substitute for the calcium but only in very small amounts. It is not a stable mineral, losing water in its structure upon exposure to air. This causes Laumontite to be white and powdery and will cause specimens to crumble when touched. It is a common mineral, found worldwide. It can be locally abundant, forming seams and veins.

Laumontite is a handsome mineral. When pure, the colour is colourless or white. Impurities may colour it orange, brownish, grey, yellowish, pink, or reddish. It was named after Gillet de Laumont (1747-1834), a French mineralogist and hunter credited with discovering this mineral in Brittany, France in 1785. Its columnar crystals can project above the clutter of crystals at its base and appear like a monument above a desert plain. Its crystals can also form smaller, almost acicular jutting prisms that look like a rugged landscape. It is very brittle. The Mohs scale hardness is 3.5-4. It has a vitreous lustre and a white streak.

It is found in hydrothermal deposits left in calcareous rocks, often formed as a result of secondary mineralization. Host rock types include basalt, andesite, metamorphic rocks and granites.

It is frequently associated with other zeolites, including stilbite and heulandite.