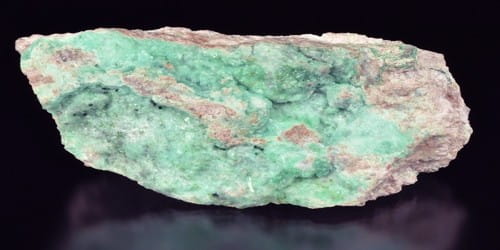 Leightonite is a rare sulfate mineral with a formula of K2Ca2Cu(SO4)4•2H2O. It is a mineral consisting of a hydrous sulfate of copper, calcium, and potassium. It was named after Tomas Leighton Donoso, a Chilean mining engineer, and Professor of Mineralogy at the University of Santiago in Chile.

Leightonite is a rare mineral found only in Chile, Namibia, and at newer localities in Austria, and Norway. It occurs at its type locality at the Chuquicamata mine in Chile in oxidized copper under low acidity conditions. Leightonite is a monoclinic-prismatic mineral containing calcium, copper, hydrogen, oxygen, potassium, and sulfur. Its crystal system is reported as triclinic morphologically, but also as pseudo-orthorhombic due to intricate lamellar twinning that mimics orthorhombic symmetry. Leightonite has a nonmetallic, somewhat glassy luster, pale blue to greenish blue color, white streak, is moderately soft (H=3), is transparent to translucent, and has no cleavage.

It was first described in 1938 for an occurrence in the Chuquicamata Mine, Colama, El Loa Province, Antofagasta Region, Chile. It occurs in alkali oxidized zones of copper deposits and is associated with natrochalcite, bloedite, atacamite, bellingerite, kröhnkite, gypsum and quartz in the discovery location at Chuquicamata, Chile, along with chalcanthite, anhydrite, and lammerite in Tsumeb, Namibia.

At the mining site of Chuquicamata, Chile, Leightonite is not found in rich ore; rather it only appears in borderland material within 50 m (160 ft) of the surface, acting as cement between rock fragments as it fills in cracks and cross-fiber veins in surfaces as a network of crystals.