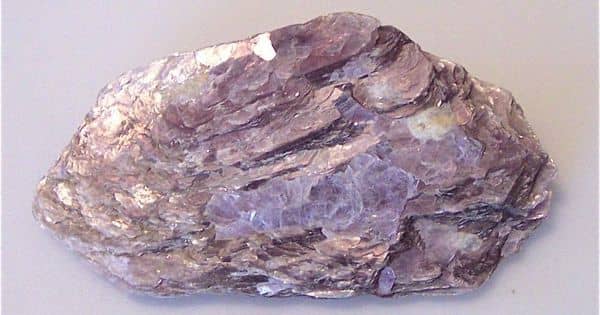 Lepidolite is a lilac-gray or rose-colored member of the mica group of minerals with the chemical formula K(Li, Al)3(Al, Si, Rb)4O10(F, OH)2. It is a lithium-aluminum potassium mineral and one of the most commonly found members of the Mica family. It is the most abundant lithium-bearing mineral and is a secondary source of this metal. It is the most common lithium-bearing mineral and serves as a minor ore of lithium metal, with rubidium and cesium sometimes being byproducts. It is a phyllosilicate mineral and a member of the polylithionite-trilithionite series.

Lepidolite is a rare mineral because these geochemical situations rarely occur. It is part of a three-part series consisting of polylithionite, lepidolite, and trilithionite. All three minerals share similar properties and are caused because of varying ratios of lithium and aluminum in their chemical formulas.

In 1861, Robert Bunsen and Gustav Kirchhoff extracted 150 kg (330 lb) of lepidolite and yielded a few grams of rubidium salts for analysis, and therefore discovered the new element rubidium.

Lepidolite is found naturally in a variety of colors, mainly pink, purple, and red, but also gray and, rarely, yellow and colorless. This stone can be found crystallized in the form of masses, plates, aggregates, stacked sheets, and tabular or prismatic crystals.

It is associated with other lithium-bearing minerals like spodumene in pegmatite bodies. It is one of the major sources of the rare alkali metals rubidium and caesium.

The most important use of lepidolite has been as a minor ore of lithium metal. It is also used to make glass and as an ingredient in some enamels. Today most lithium is produced from brine and evaporite deposits in South America, where lithium can be extracted more economically. It can be used as an ornamental stone and is an important constituent in some gem materials.