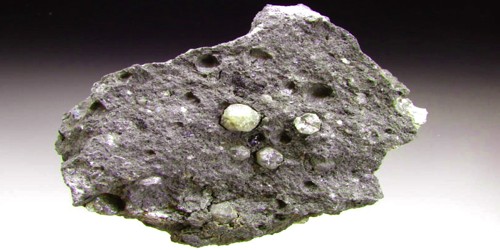 Leucite is a rock-forming mineral composed of potassium and aluminum tectosilicate K[AlSi2O6]. It is a member of the feldspathoid group, forming directly from cooling lava in volcanic rock. It is a white or gray mineral, found in potassium-rich igneous rocks; potassium aluminum silicate. Leucite is named after Greek “leukos” – white, alluding to its typical color.

When Leucite forms at high temperatures, it crystallizes as isometric crystals in trapezohedral crystal form. Crystals have the form of cubic icositetrahedra but, as first observed by Sir David Brewster in 1821, they are not optically isotropic, and are therefore pseudo-cubic. The Mohs hardness is 5.5, and the specific gravity 2.47. Inclusions of other minerals, arranged in concentric zones, are frequently present in the crystals. On account of the color and form of the crystals the mineral was early known as ‘white garnet’.

Occurrences – With potassium-rich ma¯c and ultrama¯c lavas and hypabyssal rocks, and may almost entirely compose them.

It occurs only in igneous rocks, particularly potassium-rich, silica-poor, recent lavas. Some important localities include Rome; Uganda; and Leucite Hills, Wyo., U.S. Leucite is used as a fertilizer in Italy and as a source of commercial alum.

French authors in older literature may employ René Just Haüy’s name amphigène, but ‘leucite’ is the only name for this mineral species that are recognized as official by the International Mineralogical Association.