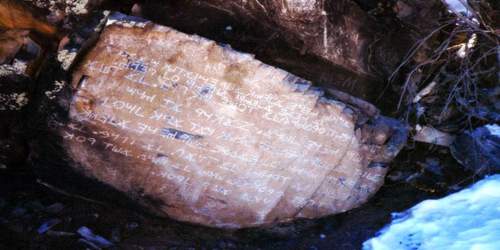 The Los Lunas Decalogue Stone is a large boulder on the side of Hidden Mountain, near Los Lunas, New Mexico, about 35 miles (56 km) south of Albuquerque, that bears a very regular inscription carved into a flat panel. It is also known as the Los Lunas Mystery Stone or ‘Commandment Rock’, the stone has a carved abridged version of the Decalogue or Ten Commandments. The stone weights over 80 tons, which is the reason why it has been ever been moved to a museum or laboratory for study and safekeeping.

The stone is controversial because some claim the inscription is Pre-Columbian, and therefore proof of early Semitic contact with the Americas. Some archaeologists have said the stone is a fake.

Back in 1996, Professor James D. Tabor of the University of North Carolina-Charlotte was able to interview Professor Frank Hibben about the Los Lunas Decalogue Stone. Hibben, who passed away in 2002, was a retired University of New Mexico archaeologist. According to Tabor’s account, Hibben was absolutely “convinced that the inscription is ancient and thus authentic. He reports that he first saw the text in 1933. At the time it was covered with lichen and patination and was hardly visible. He was taken to the site by a guide who had seen it as a boy, back in the 1880s.”

Because of the stone’s weight of over 80 tons, it was never moved to a museum or laboratory for study and safekeeping. Many visitors have cleaned the stone inscriptions over the years, likely destroying any possibility for scientific analysis of the inscriptions’ patina. Nevertheless, comparing it to a modern inscription nearby, geologist George E. Morehouse, a colleague of Barry Fell, estimated that the inscription could be between 500 and 2000 years old and explaining its freshness and lack of patina as being due to frequent scrubbing to make it more visible. 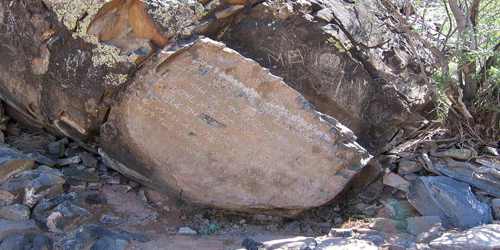 (Los Lunas Decalogue Stone after 2006 vandalization of the first line)

In April 2006, the first line of the unprotected inscription was obliterated by vandals. Visitors to the site are required to purchase a $35 Recreational Access Permit from the New Mexico State Land Office.

Most who have studied the stone are almost certain that the Los Lunas Decalogue Stone pre-dates the arrival of Christopher Columbus in North America. According to archaeologist Kenneth Feder, “the stone is almost certainly a fake.” He points out that “the flat face of the stone shows a very sharp, crisp inscription…” His main concern however is the lack of any archaeological context. He argues that to get to the location of the stone would have required whoever inscribed it to have “stopped along the way, encamped, eaten food, broken things, disposed of trash, performed rituals, and so on. And those actions should have left a trail of physical archaeological evidence across the greater American Southwest, discovery of which would undeniably prove the existence of foreigners in New Mexico in antiquity with a demonstrably ancient Hebrew material culture…” and states that “There are no pre-Columbian ancient Hebrew settlements, no sites containing the everyday detritus of a band of ancient Hebrews, nothing that even a cursory knowledge of how the archaeological record forms would demand there would be. From an archaeological standpoint, that’s plainly impossible.”

British Archeologist Keith Fitzpatrick-Matthews has concluded that “Viewed dispassionately, the Los Lunas inscription is a clear, but well-constructed forgery (for its day).” Despite the claims of high antiquity, there are features of the text (such as the mixing of letterforms between two separate alphabets) that are much more likely to derive from the work of a modern forger than from an ancient Hebrew or Samaritan scribe. The evidence for its origin is poor, but a comparison with the Bat Creek Stone suggests that it was a Mormon forgery. The ‘Mormon Battalion’, which was part of the US Army during the Mexican War, is known to have marched from Santa Fe down the Rio Grande Valley, passing close by, and it is possible that this is the date of the inscription.