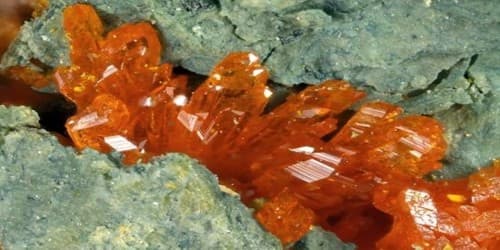 Magnesiopascoite is a bright orange mineral with formula Ca2Mg(V10O28)·16H2O. It formed from post-mining leaching and oxidation of V–U oxide replacements of organic matter. It is a member of the pascoite group and is the magnesium analogue of pascoite.

It was discovered in the U.S. state of Utah and formally described in 2008. The mineral’s name derives from its status as the magnesium analogue of pascoite. 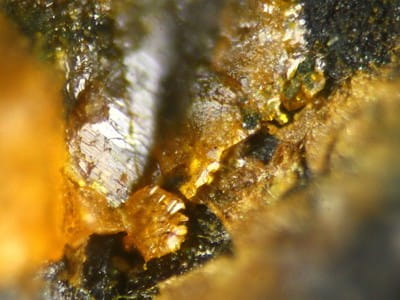 The mineral dissolves slowly in water and quickly in cold, dilute hydrochloric acid. It decomposes rapidly when mildly heated, likely as a result of dehydration.

Occurrence: Product of groundwater leaching and oxidation of vanadium oxides in a post-mining environment.

In the area of the type locality, the reducing environment caused by carbonaceous material in the Salt Wash and Brushy Basin members of the Morrison Formation precipitated uranium and vanadium minerals from solution.

The mineral and name were approved by the IMA Commission on New Minerals, Nomenclature and Classification (IMA 2007-025). Magnesiopascoite was described in 2008 in the journal Canadian Mineralogist. The two cotype specimens are held at the Natural History Museum of Los Angeles County in the US State of California.