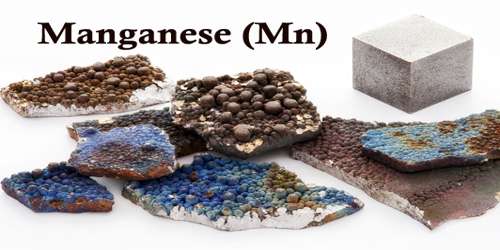 “Manganese” is a chemical element with the symbol ‘Mn’ and atomic number 25. It is not found as a free element in nature; it is often found in minerals in combination with iron. Manganese is a transition metal with a multifaceted array of industrial alloy uses, particularly in stainless steel. It is also found in many mineraloids such as psilomelane and wad.

It is one of the silvery-white, hard, brittle metals of Group 7 (VIIb) of the periodic table. Historically, ‘Manganese’ is named for pyrolusite and other black minerals from the region of Magnesia in Greece, which also gave its name to magnesium and the iron ore magnetite. By the mid-18th century, Swedish-German chemist Carl Wilhelm Scheele had used pyrolusite to produce chlorine. Scheele and others were aware that pyrolusite (now known to be manganese dioxide) contained a new element, but they were unable to isolate it. Johan Gottlieb Gahn was the first to isolate an impure sample of manganese metal in 1774, which he did by reducing the dioxide with carbon. Although it is rarely used in pure form, manganese is essential to steelmaking. 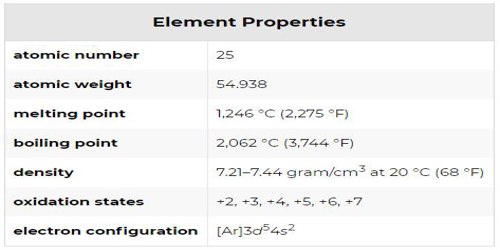 Manganese constitutes roughly 0.1 percent of the Earth’s crust, making it the 12th most abundant element. Its early use was mainly in pigments and oxidants in chemical processes. The significance of manganese to human societies exploded with the development of modern steelmaking technology in the 1860s. Manganese is essential and irreplaceable in steelmaking, and its global mining industry is dominated by just a few nations.

Manganese enzymes are particularly essential in detoxification of superoxide free radicals in organisms that must deal with elemental oxygen. Manganese also functions in the oxygen-evolving complex of photosynthetic plants. While the element is a required trace mineral for all known living organisms, it also acts as a neurotoxin in larger amounts. Especially through inhalation, it can cause manganism, a condition in mammals leading to neurological damage that is sometimes irreversible.

The amount of manganese used per ton of steel is rather small, ranging from 6 to 9 kilograms. About 30 percent of that is used during refinement of iron ore, and the remaining 70 percent is used as an alloy in the final steel product.

Manganese is essential to plant growth and is involved in the assimilation of nitrates in green plants and algae. It is an essential trace element in higher animals, in which it participates in the action of many enzymes. Lack of manganese causes testicular atrophy. An excess of this element in plants and animals is toxic. Manganese ores are primarily produced by Australia, South Africa, China, Gabon, and Brazil. Large areas of the ocean floor are covered with manganese nodules, also called polymetallic nodules, concretions of manganese with some iron, silicon, and aluminum. The amount of manganese in the nodules is estimated to be much more than that inland reserves.

Naturally occurring manganese is composed of one stable isotope; 55Mn. Eighteen radioisotopes have been isolated and described, ranging in atomic weight from 46 u (46Mn) to 65 u (65Mn). The most stable are 53Mn with a half-life of 3.7 million years, 54Mn with a half-life of 312.3 days, and 52Mn with a half-life of 5.591 days. All of the remaining radioactive isotopes have half-lives of less than three hours and the majority of less than one minute. The primary decay mode before the most abundant stable isotope, 55Mn, is electron capture and the primary mode after is beta decay. Manganese also has three meta states.

Manganese comprises about 1000 ppm (0.1%) of the Earth’s crust, the 12th most abundant of the crust’s elements. Soil contains 7–9000 ppm of manganese with an average of 440 ppm. Seawater has only 10 ppm manganese and the atmosphere contains 0.01 µg/m3. Manganese occurs principally as pyrolusite (MnO2), braunite, (Mn2+Mn3+6)(SiO12), psilomelane (Ba, H2O)2Mn5O10, and to a lesser extent as rhodochrosite (MnCO3). The most important manganese ore is pyrolusite (MnO2).

Manganese is used also as an alloy with metals such as aluminum and copper. Important non-metallurgical uses include battery cathodes, soft ferrites used in electronics, micronutrients in fertilizers, micronutrients in animal feed, water treatment chemicals, colorant for automobile undercoating, bricks, frits, glass, textiles, and tiles. The product “manganese violet” is used for the coloration of plastics, powder coatings, artist glazes, and cosmetics.

Various manganese salts also have commercial importance. Manganese sulfate (MnSO4) is added to soils to promote plant growth, especially of citrus crops. In addition, it is a good reducing agent, particularly useful in the manufacture of paint and varnish dryers. The deep-purple compound potassium permanganate (KMnO4) has many uses, most notably as a disinfectant, water purifier, and antiseptic.