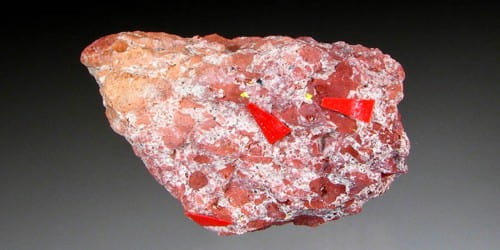 Margaritasite is a yellow, cesium-bearing mineral in the carnotite group. Its chemical formula is (Cs, K, H3O)2(UO2)2V2O8·H2O and its crystal system is monoclinic. It was first described in 1982 from Margarita’s uranium deposit in the Peña Blanca district of the municipality of Aldama, in the Mexican state of Chihuahua. 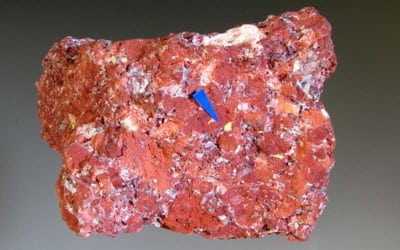 It is a fine-grained yellow mineral and, with the possible exception of the index of refraction, is optically indistinguishable from the campsite.

It is a newly recognized uranium ore mineral named for the Margaritas deposit, Pena Blanca uranium district, Chihuahua, Mexico, at which it was discovered. The Margarita’s mines are the only locality for Margaritasite and it occurs there as filling pores and casts of phenocrysts in felsic volcanic tuffs that have been altered by hot hydrothermal fluids. The margaritasite occurs as disseminated pore fillings and relict phenocryst linings within a rhyolitic tuff breccia of the lower Escuadra Formation and provides significant reserves of both uranium and cesium.