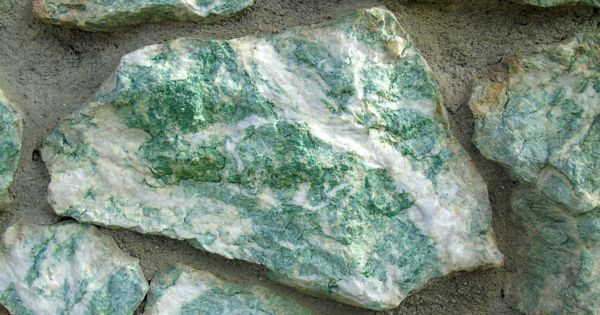 Mariposite is a chromium-rich variety of Phengite which is a discredited name for a mineral series between Muscovite and Celadonite. It is a mineral that is a chromium-rich variety of mica, which imparts an attractive green color to the generally white dolomitic marble in which it is commonly found. It is a combination stone that consists of green chromium that’s rich in mica within a white dolomitic marble. It was named for Mariposa, California, though it can be found in several places in the Sierra Nevada mountains. It usually exhibits green colors running through grey, cream, or white-colored host rocks.

It is a mineral consisting of a bright green chromium-bearing phengite. The term “mariposite” also refers to the stone in which the green mica is found. This stone is metamorphic rock, containing varying amounts of dolomite and quartz. 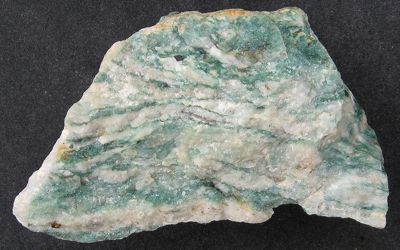 Typical Appearance is always massive, as stringers of phengite mica within a dolomitic marble with varying amounts of quartz. It is the chromium-rich mica that gives it its distinctive green color. Larger proportions of quartz give it a more attractive, translucent appearance. It is not an officially classified mineral but is a chromium-rich phengite, which is a high silica variety of muscovite. It is the chromium that gives it its distinctive green color.

Mariposite is most important for being ore of gold and a source of placer gold. It has been cut as a dimension stone to produce cemetery markers, fireplaces, facing stone, and other architectural works. It is used as a decorative construction material, in walls, monuments, and bridges. It is also made into jewelry.