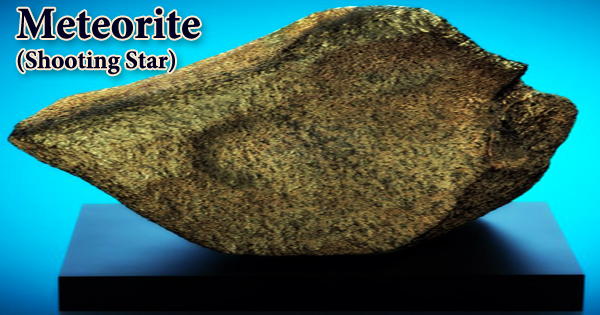 A meteorite, sometimes known as a ‘shooting star’ or a ‘falling star,’ is a solid piece of debris from an object in deep space that survives its passage through the atmosphere to reach the surface of a planet or moon, such as a comet, asteroid, or meteoroid. In current usage, the word is used to describe comparable things that descend on the surface of other, larger entities. When meteoroids collide with Earth’s atmosphere, the gases surrounding them temporarily light up as “shooting stars,” transforming them into meteors. While most meteors burn up and dissipate in the atmosphere, meteorites are formed when these space rocks hit the Earth’s surface.

For example, meteorite pieces have been discovered in Moon samples, and the robotic rover Opportunity has discovered at least one meteorite on Mars’ surface. When the initial item enters the atmosphere, it heats up and radiates energy due to friction, pressure, and chemical reactions with the atmospheric gases. The Hoba meteorite, the world’s biggest meteorite, was discovered in Namibia in 1920 and named after it.

The Hoba meteorite is around 54,000 kg in weight (119,000 pounds). Larger asteroids colliding with the moon or Mars have the potential to hurl debris our way. Because they would have to battle the Sun’s gravitational pull to reach us, there have been no verified meteorites originating in this fashion from Mercury or Venus. Meteorite falls are meteorites that are retrieved after being detected as they transit the atmosphere and hit the Earth. All of the others are referred to be meteorite discoveries.

Meteorites are classified into categories based on their structure, chemical and isotopic content, and mineralogy in modern categorization methods. Thousands of tiny pebbles reach the Earth’s atmosphere every day, yet they burn up unseen. Larger impacts are rarer: NASA estimates that a car-sized object should strike Earth once every year. Once every 2000 years, a large asteroid is projected to collide with Earth. The Tunguska event, a megaton-scale explosion that devastated a section of Siberian woodland in 1908, was the most devastating meteorite impact in recent history.

Minerals containing silicates material composed of silicon and oxygen make up stony meteorites. They also have nickel and iron in them. Achondrites and chondrites are the two main kinds of stony meteorites. The majority of iron meteorites are composed of iron and nickel. They come from the cores of asteroids and makeup roughly 5% of all meteorites on the planet. Silicate minerals (chemicals containing the elements silicon and oxygen) and metals (iron and nickel) are approximately equal in abundance in stony-iron meteorites.

Within each category, there is a great deal of variety, resulting in a plethora of subdivisions (classes, groups, and so on) based on differences in chemistry, mineralogy, and structure. It’s crucial to remember that meteorite categorization is largely determined by visible features. There have been no documented instances of human fatality caused by space rocks. However, a 40-kilogram rock from Mars landed and killed a dog in Egypt in 1911, and a tiny meteorite struck and wounded a kid in Uganda in 1992.

If meteoritic material is found in certain areas of the asteroid belt, asteroids in those areas should have the same chemical and mineralogical composition as the meteorites. Large meteoroids may collide with the planet at a fraction of their escape velocity (second cosmic velocity), producing a hypervelocity impact crater in their wake. Meteorites slam into the Earth’s atmosphere with devastating power. Impact craters are huge holes in the earth left by the biggest meteorites.

Because many radionuclides have half-lives that are comparable to or longer than the age of the solar system, they are referred to as long-lived radionuclides. The biggest meteorites in a shower are usually found in the scattered field farthest down-range. Asteroid monitors think they have discovered 90% of the truly massive rocks with the potential to strike Earth, but smaller asteroids are more difficult to locate. That isn’t a major concern since, if they do hit, they are likely to be less damaging.