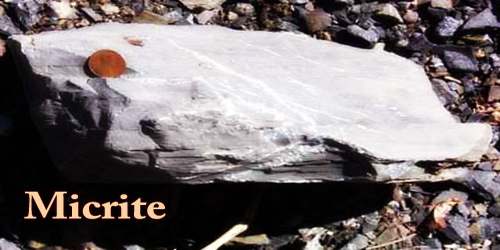 Micrite is usually composed of carbonate mud or micrite. Because of the small size of the grains or crystals in the micrite, identification of their origin is difficult to impossible. In the Folk classification, micrite is a carbonate rock dominated by fine-grained calcite. Carbonate rocks that contain fine-grained calcite in addition to allochems are named intramicrite, oomicrite, biomicrite or pelmicrite under the Folk classification depending on the dominant allochem.

The particles, which consist of fossil materials, pebbles and granules of carbonate rock and oölites (spherical nodules with concentric structure), are transported and sorted by flowing water. When formed almost entirely of shell debris, the rock is termed coquina (q.v.). Coquinite is the consolidated equivalent.

Originally it was thought to be exclusively of chemical origin, precipitating directly out of supersaturated seawater. During the 1970s and 1980’s evidence and opinion steadily shifted all the way to a biochemical origin for ‘micrite’ the sediment coming from the breakdown of calcareous algae skeletons which live abundantly in modern carbonate environments.

By the time we see the rock, however, the aragonite/calcite needles have been so recrystallized and cemented that the original nature has been destroyed. 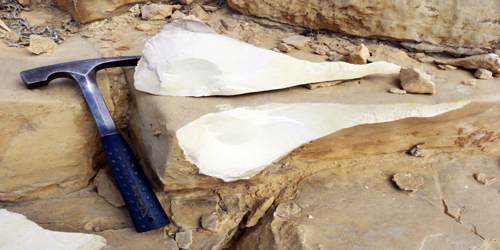 Micrite = lime mud; CaCO3, the mineral calcite. Micrite is the equivalent of clay (rock = shale) in clastics. Originally deposited as microscopic aragonite needles, but now converted to calcite and then calcite cemented to form the rock.

The fine-grained carbonate sediment micrite may be precipitated chemically or biochemically from seawater, derived from the abrasion of pre-existing calcium grains, or form during the disintegration of calcareous green algae. This sediment accumulates in a variety of settings: in the still water of protected lagoons, below wave base in deeper water, and even in agitated settings within and beneath the protection of algal mats. Should the presence of micrite be used to interpret depositional settings, then its vertical association with other lithologies and its faunal content should also be considered. Any interpretation is complicated by the existence of micrite-size cement, which may have a different distribution to that of fine sediments. The micritization of broken skeletal and non-skeletal grains, which is the recrystallization of a preexisting crystal fabric to a micritic one, also adds to the confusion. This is because these micritized grains may be mistaken for fragments of sedimentary micrite. Micrite cement is discussed in the section on cementation and diagenesis.

Micrite as a component of carbonate rocks can occur as a matrix, as micrite envelopes around allochems or as peloids. It can be generated by chemical precipitation, from disaggregation of peloids, or by micritization.

Carbonates of all types are commonly associated with regions of tectonic stability and tropical climates, that is no mountain building, and stable, shallow water environments associated with continental shelves or epeiric (epicontinental) seas.

The term “Micrite” was coined in 1959 by Robert Folk for his carbonate rock classification system. Micrite is derived from MICRocrystalline calcITE.

Micrite is one of the most common carbonate rocks. Most of what people call “limestone” is largely or exclusively micrite. As with clay (shale) it is deposited in generally quiet water and appears in any environment where those conditions exist. This specimen could have come from a tidal lake, or a subtidal lagoon, or some similar environment.