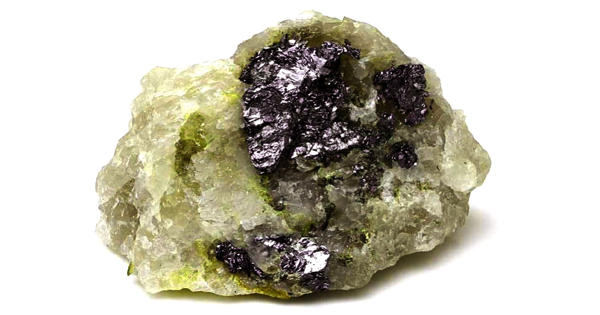 Molybdenite is a rare mineral composed of molybdenum and sulfur, with a chemical composition of MoS2. Similar in appearance and feel to graphite, molybdenite has a lubricating effect that is a consequence of its layered structure. It occurs in igneous and metamorphic rocks as gray hexagonal crystals and foliated masses with a metallic luster. The atomic structure consists of a sheet of molybdenum atoms sandwiched between sheets of sulfur atoms.

Molybdenite is the most important ore of molybdenum and often contains minor amounts of rhenium which are often produced as a byproduct. It is the most prevalent molybdenum-bearing mineral and is named after that element.

“Molybdenite is a rare mineral composed of molybdenum and sulfur. It occurs in high-temperature hydrothermal ore deposits.” 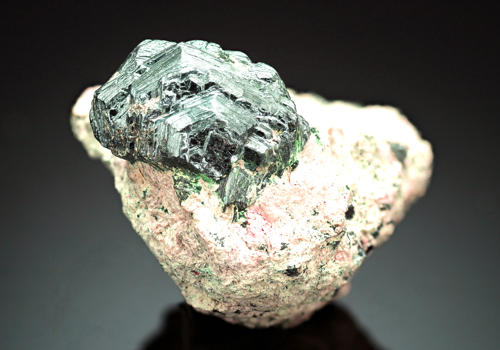 Molybdenite is extremely soft with a metallic luster, and is superficially almost identical to graphite, to the point where it is not possible to positively distinguish between the two minerals without scientific equipment. It usually has a higher luster than graphite.

Molybdenite occurs in high-temperature hydrothermal ore deposits. It occurs as isolated crystals, and foliated masses in granite, rhyolite, or pegmatite. Its associated minerals include pyrite, chalcopyrite, quartz, anhydrite, fluorite, and scheelite. Important deposits include the disseminated porphyry molybdenum deposits at Questa, New Mexico, and the Henderson and Climax mines in Colorado.

Molybdenite also occurs in porphyry copper deposits of Arizona, Utah, and Mexico. Lesser amounts are produced at mines where molybdenite is the primary product.

Molybdenite is an important ore of molybdenum, and is the most common source of the metal. It is the primary ore of molybdenum metal, which is an extremely important metal for making specialty alloys. While molybdenum is rare in the Earth’s crust, molybdenite is relatively common and easy to process and accounts for much of the metal’s economic viability. Molybdenum metal is also used in some electronic devices and to make heating elements used in high-temperature electric furnaces.

Molybdenite is purified by froth flotation and then oxidized to form soluble molybdate. Reduction of ammonium molybdate yields pure molybdenum metal, which is used for fertilizer, as a catalyst, and in battery electrodes. It is an important ingredient in making stainless steel, alloy steels, and a variety of superalloys.