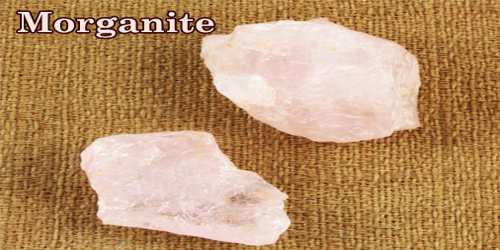 Morganite, also known as “pink beryl”, “rose beryl” “pink emerald” (which is not a legal term according to the new Federal Trade Commission Guidelines and Regulations), and “cesian (or caesian) beryl”, is a rare light pink to a rose-colored gem-quality variety of beryl. It is the name of orange to pink gemstone that has significantly grown in popularity since 2010. It is a variety of beryl, a beryllium aluminum silicate mineral with high durability.

Morganite is distinguished from other types of beryl by its orange-pink color. After sapphire, morganite is the second-most-popular colored gem used as a center stone in engagement rings today.

Morganite with its clear, peach-pink innocence embodies the first pale rays of sunrise that swells the heart and warms the soul, releasing a sense of smallness in a vast universe and opening to the overwhelming presence of a higher power. This is a Crystal of Divine Love. It brings healing, compassion, assurance, and promise. It is a powerful stone in massive form for use in ceremonies and meditations around the medicine wheel. It provides the experience of “brotherhood” and facilitates both speaking and listening with one’s heart.

Orange/yellow varieties of morganite can also be found, and color banding is common. It can be routinely heat treated to remove patches of yellow and is occasionally treated by irradiation to improve its color. The pink color of morganite is attributed to Mn2+ ions.

Until about 2011, morganite was almost unknown in jewelry stores. Since then it has been growing in popularity. This can clearly be demonstrated with a graph of search engine query volume from Google Trends. Today morganite can be found in most jewelry stores, often in rose gold mountings.

A 2019 survey done by The Knot found that the most popular non-diamond center stones in engagement rings were moissanite (19%), sapphire (18%) and morganite (12%). This is a spectacular rise in popularity for a gem that was poorly known in the marketplace just ten years earlier. 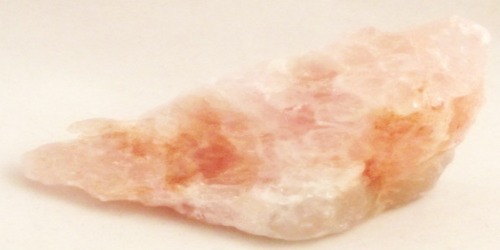 Compared to gems that have been known and appreciated for hundreds or thousands of years, morganite is a newcomer. Commercial quantities of pink beryl (the name by which morganite was known at that time) with a rich color were first discovered in Madagascar in 1910.  It was also known, with other gemstone minerals, such as tourmaline and kunzite, at Pala, California.

In December 1910, the New York Academy of Sciences named the pink variety of beryl “morganite” after financier J. P. Morgan.

Madagascar became the first source of gem morganite, and the material produced there was of a rich pink color. Other commercial deposits were later found in Afghanistan, Brazil, Mozambique, Namibia, and the United States (California and Maine). Today, most of the world’s supply of morganite is being mined in the state of Minas Gerais, Brazil.

On October 7, 1989, one of the largest gem morganite specimens ever uncovered, eventually called “The Rose of Maine”, was found at the Bennett Quarry in Buckfield, Maine, US. The crystal, originally somewhat orange in hue, was 23 cm (9 in) long and about 30 cm (12 in) across, and weighed (along with its matrix) just over 50 pounds (23 kg).

As a variety of beryl, morganite has a Mohs hardness of 7.5 to 8. This is harder than all but a few popular gemstones (diamond, ruby, sapphire, and topaz) and harder than almost any common object that a gemstone might come in contact with. This makes morganite an excellent stone for use in engagement rings, which are expected to retain an attractive appearance across a lifetime of wear.

Compared to Emerald, the green variety of gem beryl, morganite is relatively free of inclusions and fractures. This makes it a more durable gem than emerald when used in jewelry.

Morganite is a pleochroic gem. That means it has slightly different colors when viewed from different directions. It has a slightly richer color when viewed down its “c” crystallographic axis. Cutters who study their rough carefully, and orient their faceted stones with the c-axis perpendicular to the table of the cut gem, will produce stones that exhibit a richer, often pinker color when viewed in the face-up position.

Morganite’s Color: Pink Morganite brings the energy rays of determination, commitment, and caring. Its soothing color calms feelings of anger or resentment and can aid efforts to meditate and reflect. Pink is the color of new love, new romance, and new relationships. It increases developing sensuality and can help overcome heartache, aiding in the improvement of our caring and loving abilities.

The pale peach or orange influence in Morganite promotes companionship and affection, bringing joy and friendship, pleasure, and family togetherness. It is a happy and sharing stone, integrating the parts of our communal lives, and is a stone of physical pleasure and intimacy. 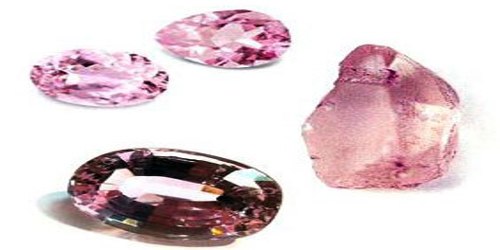 Uses and Benefits of Morganite –

Morganite is pink beryl. This makes it related to emerald (green beryl) and aquamarine (blue beryl). The pink color of morganite is from manganese. High-grade translucent morganite is often faceted for fine jewelry, but people can also find rough specimens and lower-grade opaque semi-precious beads. The delicate peach color is often sought after for engagement and wedding rings.

Morganite has a color that ranges from slightly yellowish-orange, to orange, to orangy pink, to pink, to slightly purplish pink. This color range appeals to many people and has an attractive appearance in rose gold jewelry mountings, which have also grown in popularity. Wearing Morganite, especially in gem form, evokes a sense of peace, joy and inner strength; worn for extended periods of time, it encourages a growth of confidence and power that comes from a constant awareness of the connection to Divine love.

Morganite is a heart chakra stone and carries the energy of Divine love and compassion. It is an excellent stone to work with emotional trauma. It helps people come to terms with past pain and see the meaning and purpose of it in the larger path of their life. Morganite brings a sense of peace, lightness, and joy for everyone and a constant and abiding sense of the presence of Divine love permeating everything.

Morganite supports the physical heart, strengthening its energy field and helping to establish its place of dominance in the aura. It counters palpitations and other heart-related problems, as well as clearing the lungs, treating the nervous system, and relieving stress-related illnesses. This mineral may be used in conjunction with treatments for asthma, emphysema, and tuberculosis; and for oxygenating and restructuring disordered cells at the cellular level. Morganite is also thought to assist the larynx, tongue and thyroid gland, and aids in treatments for vertigo and impotence

Morganite is highly beneficial for cultivating the human spirit and allowing one’s personality to consciously align with the ethereal soul. Its crystal energy is forever attuned to the immense love of the Divine and reminds us we are all connected to a Universal Heart and part of a larger plan. It also expands our ability to connect with and receive guidance from angelic beings and other higher entities, bringing the reassurance of support from Spirit on the emotional level. In circumstances where a tragic event or loss has shaken one’s faith in the Divine, this crystal can also assist in restoring trust in Spirit and confidence in the Divine’s plan for one’s life.