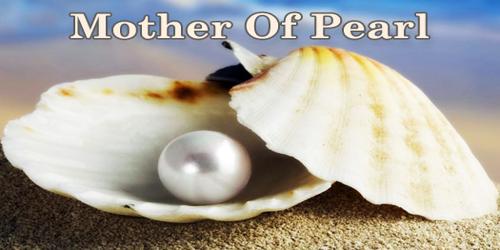 Mother of Pearl (MOP), also known as ‘Nacre’ (/ˈneɪkər/ NAY-kər also /ˈnækrə/ NAK-rə), is a smooth shining iridescent substance forming the inner layer of the shell of some molluscs, especially oysters and abalones. It is strong, resilient, and iridescent.

‘MOP’ or ‘Nacre’ is found in some of the most ancient lineages of bivalves, gastropods, and cephalopods. However, the inner layer in the great majority of mollusc shells is porcellaneous, not nacreous, and this usually results in a non-iridescent shine, or more rarely in non-nacreous iridescence such as flame structure as is found in conch pearls.

The outer layer of cultured pearls and the inside layer of pearl oyster and freshwater pearl mussel shells are made of nacre. Other mollusc families that have a nacreous inner shell layer include marine gastropods such as the Haliotidae, the Trochidae and the Turbinidae.

The mother of pearl is a usual first-anniversary gemstone gift. This stone is actually a provider of protection, as it brings the gentle healing prowess of the sea. It’s also a stress-relieving stone aids in calming, soothing, and relaxing the emotions. This stone also stimulates the intuition, adaptability, sensitivity, and imagination. It also helps the emotions in becoming more balanced and harmonious.

Structure and Properties of Mother of Pearl (MOP) –

‘MOP’ or ‘Nacre’ is composed of hexagonal platelets of aragonite (a form of calcium carbonate) 10-20 µm wide and 0.5 µm thick arranged in a continuous parallel lamina. Depending on the species, the shape of the tablets differ; in Pinna, the tablets are rectangular, with symmetric sectors more or less soluble. Whatever the shape of the tablets, the smallest units they contain are irregular rounded granules. These layers are separated by sheets of organic matrix (interfaces) composed of elastic biopolymers (such as chitin, lustrin, and silk-like proteins). This mixture of brittle platelets and the thin layers of elastic biopolymers makes the material strong and resilient, with a Young’s modulus of 70 GPa (when dry). Strength and resilience are also likely to be due to adhesion by the “brickwork” arrangement of the platelets, which inhibits transverse crack propagation. This structure, at multiple length sizes, greatly increases its toughness, making it almost as strong as silicon. 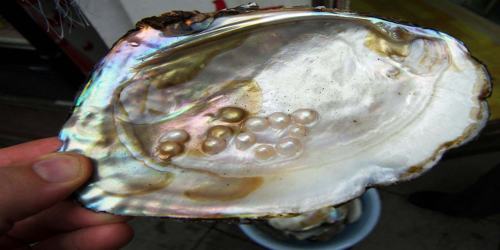 Moreover, the mother of pearl frequently comes in pale pink, white, and off-white tones or colors. The term mother of pearl originally came from the Latin word mater perlarun.

The mother of pearls may also be extracted from the Persian Gulf that is known as the largest mall in terms of pearl production. Some other notable localities include Australia, China, Japan, and Venezuela, plus some other pacific islands and rivers in North America and Europe.

Formation: ‘MOP’ or ‘Nacre’ formation is not fully understood. The initial onset assembly, as observed in Pinna Nobilis, is driven by the aggregation of nanoparticles (~50-80 nm) within an organic matrix that arrange in fiber-like polycrystalline configurations. The particle number increases successively and when critical packing is reached; they merge into early-nacre platelets.

‘MOP’ or ‘Nacre’ growth is mediated by organics, controlling the onset, duration, and form of crystal growth. Individual aragonite “bricks” are believed to quickly grow to the full height of the nacreous layer and expand until they abut adjacent bricks. This produces the hexagonal close-packing characteristic of nacre. Bricks may nucleate on randomly dispersed elements within the organic layer, well-defined arrangements of proteins, or may grow epitaxially from mineral bridges extending from the underlying tablet. Nacre differs from fibrous aragonite a brittle mineral of the same form in that the growth in the c-axis (i.e., approximately perpendicular to the shell, in nacre) is slow in nacre, and fast in fibrous aragonite.

The pearl oysters and abalone are the most mutual source of this particular material. Also, this is extensively used as an inset in lots of musical instruments, jewelry pieces, and furniture. There is commonly a mineral and organic substance, which creates the mother of pearl.

Bits of aragonite hexagonal plates bond with the conchiolon in alternating or arranged layers. The layers are being supplemented over time, and lots of layers accumulate, which make them resilient and tough.

A protection stone, Mother of Pearl brings the gentle healing power of the sea.  It is a stress relieving stone; relaxing, soothing and calming to the emotions.  Mother of Pearl stimulates our intuition, imagination, sensitivity and adaptability.  It helps our emotions become more harmonious and balanced.  Calming and soothing to temper or feelings of fear.  It enables you to more easily express feelings of love.  Mother of Pearl (MOP) helps with clarity in decision making and is helpful for endurance, organization and for home life.

The main commercial sources of mother of pearl have been the pearl oyster, freshwater pearl mussels, and to a lesser extent the abalone, popular for their sturdiness and beauty in the latter half of the 19th century.

Widely used for pearl buttons especially during the 1900s, were the shells of the great green turban snail Turbo marmoratus and the large top snail, Tectus niloticus. The international trade in the mother of pearl is governed by the Convention on International Trade in Endangered Species of Wild Fauna and Flora, an agreement signed by more than 170 countries.

Uses and Benefits of Mother of Pearl (MOP) –

Mother of Pearl (MOP) can have a base color of white, cream, or gray with a beautiful iridescent play-of-color. MOP has been used to produce jewelry and buttons. It has been used for fancy inlay work on musical instruments and furniture. It was much more widely used before plastic manufacturing became common.

This gem is known to be essential in treating vision problems, wounds, and dizziness. It may also help the body in preventing any infections, as well as in rooting out any hidden conditions and physical illnesses. The mother of pearl may also stimulate reflex action, as well as boost the immunity through ridding off toxins.

The mother of pearl is a kind of stone, which may help in relieving people of all relationship anxieties and stress. It’ll also relax and calm our emotions, assisting us in achieving a more harmonious and balanced love life. It’ll also bring relaxation and calmness to the heart. It also soothes hot tempers, as well as release the fearful feelings.

Moreover, mother of pearl also strengthen our own intuition, as well as stimulate the imagination.