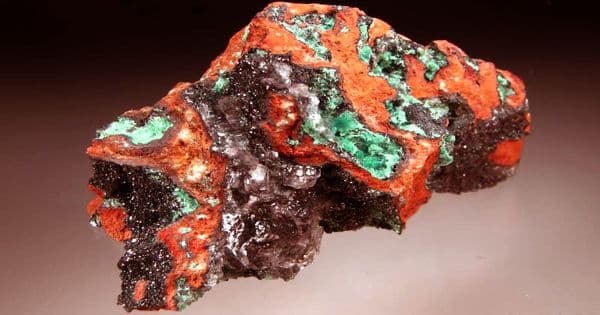 Murdochite is an isometric-hexoctahedral black mineral containing bromine, chlorine, copper, lead, and oxygen. It is a mineral combining lead and copper oxides with the formula PbCu6O8-x(Cl, Br)2x (x ≤ 0.5). It’s a mineral that was first described in 1953.

It was first discovered in 1953 in the Mammoth-Saint Anthony Mine in Pinal County, Arizona by Percy W. Porter, a mining engineer who handpicked a 401.5-mg sample. It was named for Joseph Murdoch (1890–1973), an American mineralogist. Murdochite was first suggested to be of a cubic structure. 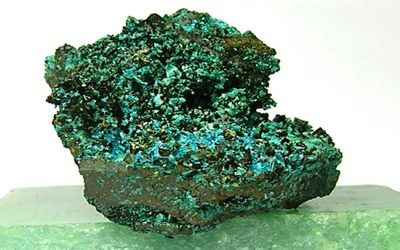 Murdochite is an opaque mineral that exhibits a black color, adamantine luster, black streak, and isotropic optical class. The mineral is known to be brittle, have a hardness of 4, and have {111} cleavage. The calculated density of murdochite was determined to be 6.1 g/cm3 and have a measured density of 6.47 g/cm3.

Naturally, occurring murdochite was first discovered in Mammoth Mine, Arizona. Mammoth Mine, which is about 46 miles northeast of Tucson, contains deposits of molybdenum, lead, gold, zinc, vanadium, sphalerite, and galena. In this mine, murdochite was found embedded in plates of wulfenite as well as on the surface of crystals of fluorite.

Other crystals found in Mammoth Mine include hemimorphite, willemite, and quartz. Larger masses of murdochite have also been found at the T. Kguni Mine in Anarak, Iran. More recently, small murdochite crystals were found encrusting aurichalcite crystals in the Granite Gap Mines in New Mexico.