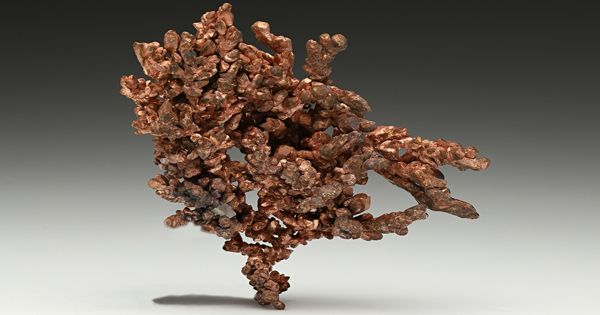 Native copper is an element and a mineral. It is an uncombined form of copper that occurs as a natural mineral. It is rarely found in large quantities, thus it is seldom the primary target of a mining operation. Copper is one of the few metallic elements to occur in native form, although it most commonly occurs in oxidized states and mixed with other elements. Most copper produced is extracted from sulfide deposits.

Native copper was an important ore of copper in historic times and was used by pre-historic peoples.

It has a reddish, orangish, and/or brownish color on fresh surfaces, but typically is weathered and coated with a green tarnish of copper(II) carbonate (also known as patina or verdigris). Its specific gravity is 8.9 and its hardness is 2.5–3.