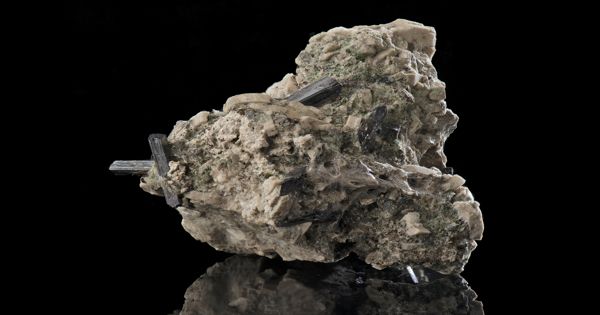 Nenadkevichite is an orthorhombic hydrated silicate of sodium, calcium, niobium, and titanium, which occurs as pale yellow crystals. It is a rare silicate mineral containing niobium with the formula: (Na, Ca) (Nb, Ti)Si2O7·2H2O. It was named in honor of Konstantin Avtonomovich Nenadkevich who was a Russian mineralogist and geochemist for the A.E. Fersman Mineralogical Museum in Moscow, Russia.

Nenadkevichite is a rare silicate mineral containing niobium. It forms brown to yellow to rose-colored orthorhombic dipyramidal crystals with a dull to earthy luster. It has a Mohs hardness of 5 and a specific gravity of 2.86. The crystal structure, like the other members of the labuntsovite nenadkevichite group, contains columns formed by (Nb, Ti)-octahedra with shared trans-vertices.

Nenadkevichite was first reported in 1955 from a nepheline syenite pegmatite in the Kola Peninsula. It is a rare mineral that occurs “between crystals of microcline in a nartolite-albite-rich pegmatite in nepheline syenite in a differentiated alkalic massif” at its Russian locality in the Lovozero massif, and “in pegmatites, cavities in igneous breccias, hornfels, and marble xenoliths in an intrusive alkalic gabbro-syenite complex at the Mont Saint-Hilaire locality in Canada.