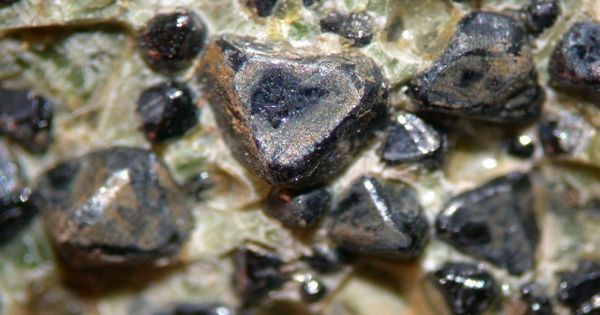 Nichromite (Ni, Co, Fe)(Cr, Fe, Al)2O4 is a black cubic metallic mineral and a member of the spinel group. It is an isometric-hexoctahedral black mineral containing aluminum, chromium, cobalt, iron, nickel, and oxygen. The spinel group minerals have been the focus of many studies, not only because of their economic interest but also due to the fact that they are very useful as petrogenetic indicators.

The mineral has only been found in the Bon Accord Nickel Deposit in South Africa where it is formed by replacing chromite and rimmed by trevorite.

The atomic arrangement of the spinel group is a commonly studied structure and characteristically has four closely packed oxygen atoms. The nickel atoms are organized corresponding to a “normal” spinel arrangement.