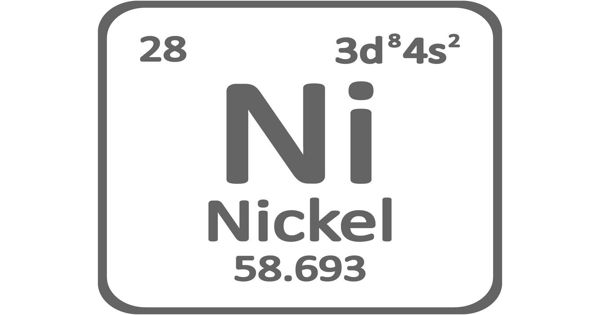 Nickel is a naturally occurring metallic element with a silvery-white, shiny appearance. It is a chemical element with the symbol Ni and atomic number 28. It is the fifth most common element on earth and occurs extensively in the earth’s crust and core. It is a silvery-white lustrous metal with a slight golden tinge.

Nickel belongs to the transition metals and is hard and ductile. While the concentration of nickel in the earth’s crust is 80 parts per million, the earth’s core consists mainly of a nickel-iron alloy. Pure nickel, powdered to maximize the reactive surface area, shows a significant chemical activity, but larger pieces are slow to react with air under standard conditions because an oxide layer forms on the surface and prevents further corrosion.

Nickel was first identified as a unique element in 1751 by Baron Axel Fredrik Cronstedt, a Swedish mineralogist and chemist.

Nickel is a silvery-white metal with a slight golden tinge that takes a high polish. It is one of only four elements that are magnetic at or near room temperature, the others being iron, cobalt and gadolinium. Its Curie temperature is 355 °C (671 °F), meaning that bulk nickel is non-magnetic above this temperature.

Nickel occurs naturally, principally as oxides, sulphides and silicates. On Earth, it occurs most often in combination with sulfur and iron in pentlandite, with sulfur in millerite, with arsenic in the mineral nickeline, and with arsenic and sulfur in nickel galena. The total amount of nickel dissolved in the sea has been calculated to be around 8 billion tons.

Even so, pure native nickel is found in Earth’s crust only in tiny amounts, usually in ultramafic rocks, and in the interiors of larger nickel–iron meteorites that were not exposed to oxygen when outside Earth’s atmosphere. Annual production exceeds 500.000 tons and easily workable reserves will last at least 150 years.

Nickel is commonly found in iron meteorites as the alloys kamacite and taenite. The metal is mined in Russia, Australia, New Caledonia, Cuba, Canada and South Africa. The presence of nickel in meteorites was first detected in 1799 by Joseph-Louis Proust, a French chemist who then worked in Spain.

It is a silvery-white metal that is used mainly to make stainless steel and other alloys stronger and better able to withstand extreme temperatures and corrosive environments. It is, however, mainly used in making alloys such as stainless steel.