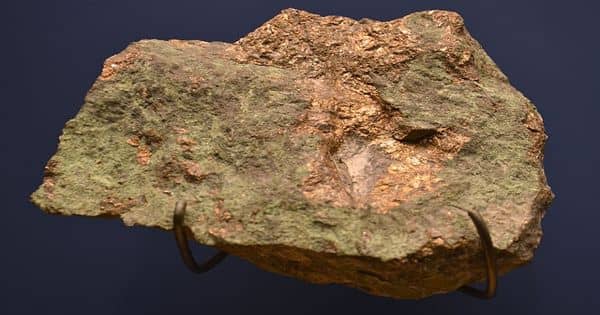 Nickeline or niccolite is a mineral consisting of nickel arsenide (NiAs) containing 43.9% nickel and 56.1% arsenic. It can be found in nickel-copper ores from high-temperature hydrothermal veins as well as massive and disseminated in peridotite and norite. It was officially named Nickeline by French mineralogist Francois Sulpice Beudant in 1832 and subsequently renamed Niccolite by James Dwight Dana in 1868, derived from the Latin word for a nickel.

Small quantities of sulfur, iron and cobalt are usually present, and sometimes the arsenic is largely replaced by antimony. Nickeline is not exactly a common mineral, but is found with other nickel and cobalt sulfide ores and thus it is included with them when mined for their various ores. This last forms an isomorphous series with breithauptite (nickel antimonide).

Nickeline is a usually massive, pale copper-red mineral, nickel arsenide, NiAs, with a metallic luster. Crystals are always small and usually in aggregates or plates. Most commonly massive, reniform, plumose, as crusts, as patches and splotches in host rock, and in veins.

Nickeline is formed by hydrothermal modification of ultramafic rocks and associated ore deposits, and may be formed by replacement of nickel-copper bearing sulfides (replacing pyrite via sulfidation and associated arsenopyrite-nickeline-breithauptite. The main compound within nickeline, nickel arsenide (NiAs), can be prepared by direct combination of the elements:

Nickeline is a mineral, a form of nickel arsenide, NiAs, having a metallic lustre and copper-red colour, that is a minor ore of nickel. It is formed by hydrothermal modification of ultramafic rocks and associated ore deposits, and may be formed by replacement of nickel-copper bearing sulfides, or via metasomatism of sulfide-free ultramafic rocks, where metasomatic fluids introduce sulfur, carbonate, and arsenic. It is any of several varieties of nickel silver. This typically results in mineral assemblaged including millerite, heazelwoodite and metamorphic pentlandite-pyrite via sulfidation and associated arsenopyrite-nickeline-breithauptite.

Nickeline is rarely used as a source of nickel due to the presence of arsenic, which is deleterious to most smelting and milling techniques. However, arsenic bearing nickel ore may be treated by blending with ‘clean’ ore sources, to produce a blended feedstock which the mill and smelter can handle with acceptable recovery.