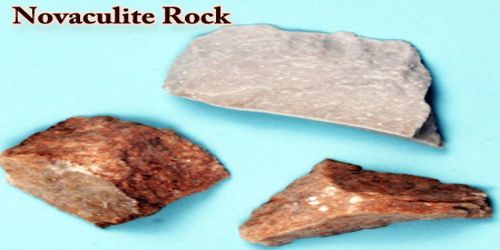 Novaculite, also called Arkansas Stone, ivery dense, light-coloured, even-textured sedimentary rock, a bedded chert in which microcrystalline silica (silicon dioxide, SiO2) in the form of quartz predominates over silica in the form of chalcedony. It is commonly white to grey or black in color, with a specific gravity that ranges from 2.2 to 2.5. It is also known or recognized as a recrystallized chert variety. It’s a hard and dense stone and often white to grayish black in color. It’s translucent on its sharp edges and often breaks with a smooth shell-like fracture.

Novaculite is used in the production of sharpening stones. It occurs in parts of Arkansas, Oklahoma, and Texas, as well as in Japan and parts of the Middle East. The name novaculite is derived from the Latin word novacula, meaning a sharp knife, dagger, or razor in reference to its use in sharpening. It forms from sediments deposited in marine environments where organisms such as diatoms (single-celled algae that secrete a hard shell composed of silicon dioxide) are abundant in the water. When the diatoms die, their silicon dioxide shells fall to the seafloor. In some areas these diatom shells are the primary ingredient of the seafloor sediments.

During diagenesis (the transformation from sediment to rock) the silicon dioxide from the diatom shells is transformed into chalcedony (a microcrystalline silicon dioxide). At this point the rock is chert. The chert is transformed into novaculite as further diagenesis and low-grade metamorphism recrystallize the chalcedony into microcrystalline quartz grains.

Novaculite is the finest and rarest abrasive stone that can be found on earth. This stone is a type of high-purity silica, which is composed of more than 99% pure silica. 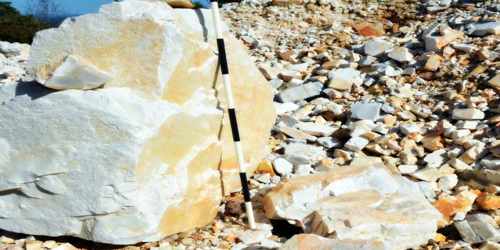 Occurrence and Properties of Novaculite –

In addition, novaculite is also a microscopically porous stone meaning, it may be dyed or stained. Metallic nitrates, salts, or carbohydrates may penetrate it at great extents. The direct heating may also produce drastic results on this stone. The notable occurrences of this stone may be found in Ural Mountains in Russia, Brazil, as well as in various localities in Africa and USA.

The novaculite beds of the south-central United States were deposited in the Ouachita Geosyncline, a deep-water marine trough, during Silurian to early Mississippian time. Sedimentation consisted primarily of siliceous skeletal particles of marine organisms such as sponge spicules and radiolaria, and very fine-grained, wind-blown quartz particles; there was very little argillaceous sedimentation during novaculite deposition. The novaculite beds were later subjected to folding and uplift, and probably low-grade metamorphism, during the Ouachita orogeny in early Pennsylvanian time.

Novaculite is a microscopically porous stone, which means it can be stained or dyed. Carbohydrates, salts, or metallic nitrates can penetrate it at great depths. Precise heating can also yield dramatic results with this stone!

Novaculite is actually a kind of sedimentary rock that is made of microcrystalline quartz. Further, it is also recognized or known as the recrystallized chert variation. This is dense and hard, as well as frequent white-greyish black in color. It is also translucent on the sharp edges, as well as frequently breaks with smooth shell-like fracture. This gemstone is a type of high-clarity silica that is comprised of above 99 percent pure silica.

Native Americans were the first people to mine the Arkansas Novaculite Formation. They noticed its conchoidal fracture and discovered that it could be knapped just like flint into projectile points, scrapers, and cutting tools. They mined novaculite, used it to manufacture cutting tools and weapons, and traded the material and products over a broad area. The Quapaw, Osage, Caddo, Tunica, Chickasaw, and Natchez tribes were especially involved in the mining.

Prehistoric people in other parts of the world have worked novaculite deposits to manufacture weapons and cutting tools. Novaculite and manufactured products from these areas were transported and traded across great distances.

Uses and Benefits of Novaculite –

Because novaculite is very hard and dense, it has been mined since prehistoric times, first for use as arrow and spear points, and later to make sharpening stones. Novaculite-rich sharpening stones from Arkansas are called Arkansas stones; stones produced in the Ottoman empire (Syria, Lebanon, and Israel) were called Turkey stones; and novaculite stones were also produced in Japan.

Novaculite is a very durable rock that resists abrasion and is well suited for use as road base, railroad ballast, and rip-rap. Although it works especially well, its use in these applications is avoided. The reason: novaculite is so abrasive on metal that it causes excessive wear on excavating equipment used to mine it, on crushers and classifiers used to process it, and it wears out the beds of trucks that haul it. Novaculite is also not used as a concrete aggregate for the same reasons and because it reacts with cement to produce pop-outs (aggregate grains that separate from the concrete to produce a pit in the pavement surface).

The novaculite may also be used for the psychic surgery on the chakras on the etheric body. This particular stone is also a great conductor of electromagnetic energy, and it may change the etheric blueprint that we have. This may be a very essential stone as well for those who sell services to some other people, as it may bring the buyer, as well as the seller together.

Novaculite sometimes serves as a reservoir for oil and natural gas. Several oil and gas fields in the Ouachita overthrust belt of Oklahoma and Texas produce from the Caballos Novaculite. Tripolitic chert zones near the top of the rock unit can have significant porosity, and the highly fractured novaculite is another form of porosity. Areas underlain by fractured novaculite are also preferred drilling sites when drilling for groundwater.

The weathered upper strata of Arkansas novaculite, known as tripoli or “rotten stone”, are rich in silica and have found a niche market as a performance additive or filler in the coatings, adhesives, sealants, and elastomer industries. Tripoli is mined just east of Hot Springs, Arkansas by the Malvern Minerals Company.

This stone may be so effective in treating moles and warts. This may also assist in getting rid of chills, as well as promote a healthy skin. It might also work some wonders on the elasticity of the skin and assist in cellular structure. This is really a stone, which may provide multi-dimensional healing. It may also attract good fortune and good luck.

The healing properties of Novaculite will stop people from being emotionally vulnerable. It will get their out of their depression and fill them with the motivation to start being happy again!