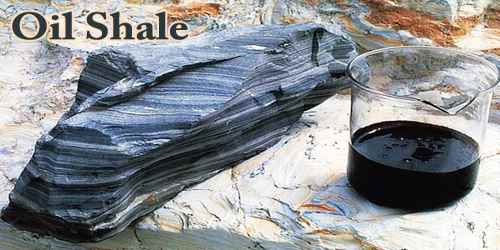 Oil Shale is a rock that contains significant amounts of organic material in the form of kerogen. Kerogen is a part of the rock that breaks down and releases hydrocarbons when heated. Up to 1/3 of the rock can be solid kerogen. Hydrocarbons are substances made entirely of hydrogen and carbon. Petroleum and natural gas are probably the most familiar hydrocarbons. The hydrocarbons in oil shale can be used as an alternative to petroleum or natural gas.

Shale oil is a substitute for conventional crude oil; however, extracting shale oil from oil shale is more costly than the production of conventional crude oil both financially and in terms of its environmental impact. Deposits of oil shale occur around the world, including major deposits in the United States. A 2016 estimate of global deposits set the total world resources of oil shale equivalent of 6.05 trillion barrels (962 billion cubic meters) of oil in place.

Like traditional petroleum, natural gas, and coal, oil shale and kerogen are fossil fuels. Fossil fuels developed from the remains of algae, spores, plants, pollen, and a variety of other organisms that lived millions of years ago in ancient lakes, seas, and wetlands.

When these organisms died and drifted to the seabed, they were buried under new layers of plants and sediment. They encountered intense pressure and heat, decomposed, and slowly transformed into the waxy substance known as kerogen.

Oil shale usually meets the definition of “shale” in that it is “a laminated rock consisting of at least 67% clay minerals.” However, it sometimes contains enough organic material and carbonate minerals that clay minerals account for less than 67% of the rock.

Heating oil shale to sufficiently high temperature causes the chemical process of pyrolysis to yield a vapor. Upon cooling the vapor, the liquid shale oil an unconventional oil is separated from combustible oil-shale gas (the term shale gas can also refer to gas occurring naturally in shales). Oil shale can also be burned directly in furnaces as a low-grade fuel for power generation and district heating or used as a raw material in chemical and construction-materials processing.

Oil shale gains attention as a potentially abundant source of oil whenever the price of crude oil rises. At the same time, oil-shale mining and processing raise a number of environmental concerns, such as land use, waste disposal, water use, waste-water management, greenhouse-gas emissions, and air pollution. Estonia and China have well-established oil shale industries, and Brazil, Germany, and Russia also utilize oil shale. The United States, however, has the most shale resources.

Oil shale can be thought of as a precursor to oil and natural gas. With more pressure and over more geological time, kerogen would heat to its “oil window” or “gas window” (the temperature at which it would release crude oil or natural gas).

Spanning the U.S. states of Colorado, Utah, and Wyoming, the Green River formation is an underground oil shale formation that contains as much as 1.8 trillion barrels of shale oil. Although not all of this can be extracted, it is more than three times the proven petroleum reserves of Saudi Arabia.

The general composition of oil shales constitutes inorganic matrix, bitumens, and kerogen. Oil shales differ from oil-bearing shales, shale deposits that contain petroleum (tight oil) that is sometimes produced from drilled wells. Examples of oil-bearing shales are the Bakken Formation, Pierre Shale, Niobrara Formation, and Eagle Ford Formation. Oil shale actually differs from bitumen-impregnated rocks (oil sands and petroleum reservoir rocks), humic coals and carbonaceous shale. While oil sands do originate from the biodegradation of oil, heat and pressure have not (yet) transformed the kerogen in oil shale into petroleum that means that its maturation does not exceed early mesocatagenetic.

Oil shale contains a lower percentage of organic matter than coal. In commercial grades of oil shale the ratio of organic matter to the mineral matter lies approximately between 0.75:5 and 1.5:5. At the same time, the organic matter in oil shale has an atomic ratio of hydrogen to carbon (H/C) approximately 1.2 to 1.8 times lower than for crude oil and about 1.5 to 3 times higher than for coal. The organic components of oil shale derive from a variety of organisms, such as the remains of algae, spores, pollen, plant cuticles and corky fragments of herbaceous and woody plants, and cellular debris from other aquatic and land plants. Some deposits contain significant fossils; Germany’s Messel Pit has the status of a Unesco World Heritage Site. The mineral matter in oil shale includes various fine-grained silicates and carbonates. An inorganic matrix can contain quartz, feldspars, clays (mainly illite and chlorite), carbonates (calcite and dolomites), pyrite, and some other minerals. 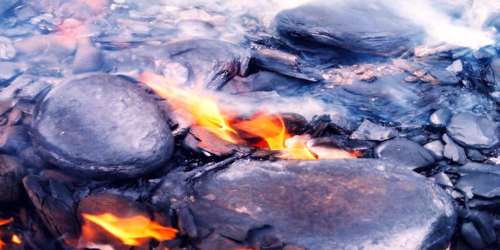 Oil shales are classified in three main types based on their mineral content: carbonate-rich shale, siliceous shale, and cannel shale.

Humans have used oil shale as a fuel since prehistoric times since it generally burns without any processing. Around 3000 BC, “rock oil” was used in Mesopotamia for road construction and making architectural adhesives. Britons of the Iron Age also used to polish it and form it into ornaments.

The modern shale industry began in the 19th century. This industry used industrial processes to heat shale in order to extract oil. Shale oil was used for a variety of products, including paraffin wax.

European countries, and later the United States, began extracting oil shale and shale oil and burning them as sources of fuel. The first U.S. shale mining facilities were established in the Ohio River Valley in the states of Pennsylvania, Ohio, West Virginia, and Kentucky.

Following the 1973 oil crisis, world production of oil shale reached a peak of 46 million tonnes in 1980 before falling to about 16 million tonnes in 2000, due to competition from cheap conventional petroleum in the 1980s. The global oil-shale industry began to revive at the beginning of the 21st century. In 2003, an oil-shale development program restarted in the United States. Authorities introduced a commercial leasing program permitting the extraction of oil shale and oil sands on federal lands in 2005, in accordance with the Energy Policy Act of 2005.

Many nations, including Estonia, China, and Brazil, continue to rely on oil shale for fuel. It is burned to generate electricity, is a component in chemical industries, and byproducts are used in cement production.