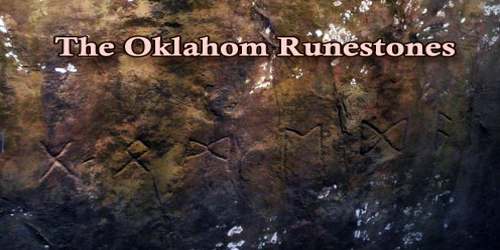 A number of “Runestones” have been found in ‘Oklahoma’. All of them are likely of modern origin, with some of them possibly dating to the 19th century “Viking revival” or being produced by 19th-century Scandinavian settlers. The oldest of them is the ‘Heavener Runestone’, first documented in 1923. Two other “Heavener Runestones” are most likely not runic at all but exhibit incisions of Native American origin. Three other runestones, found in Poteau, Shawnee, and Pawnee, are of modern date.

The word “rune” comes from Old Norse and means “Secret knowledge and wisdom”. The true age and origin of the runes is still shrouded in mystery. Symbols resembling runes appear as cave markings as early as the late Bronze Age. It was not until about 200 AD, when the runemal (i.e. the art of runic interpretation) was wide-spread in Northern Europe that the runic alphabet emerged. 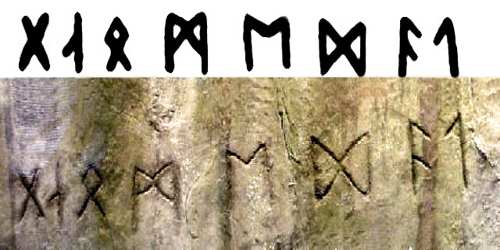 The “Heavener Runestone” is located in Heavener Runestone Park in Le Flore County, Oklahoma, near Heavener, Oklahoma. The runes on the stone are ᚷᛆᛟᛗᛖᛞᚨᛐ. The eight symbols increased gradually in size from 6 1/2 inches at the left to the final 9 1/2 inch one at the right. Most of these characters belong to the Elder Futhark, but the final “L” is reversed compared with the last “A”, and the second character is a short-twig “A” from the Younger Futhark. The transcription is then gaomedal, but it is generally thought that the intention is that the second character should be an elder futhark “N” (also reversed). The inscription then reads gnomedal (either “gnome valley”, or a personal name “G. Nomedal”). Media presented at the Visitor’s Center translate the ᛆ as an “L”, and state that the inscription was probably a claim marker meaning “valley belonging to Glome,” or “Glome’s Valley.”

Henrik Williams, a professor of Scandinavian languages at Uppsala University, Sweden studied the stone in detail and concluded that although this is probably one of the most impressive runic memorials, monuments, in the entire world, this is not a Viking runestone.  The stone, uncharacteristically large for a runestone, has eight runes carved into it. The letters when translated into English read GNOMEDAL or GNLOMEDAL, which have been interpreted to mean Gnome Valley, G. Nomedal, or the phrase Williams prefers, Little Valley.

Williams said the runes date to those used in the earliest of four runic systems known as the Elder Futhark. The system was used from roughly 100 to 700 A.D., predating the first Vikings by at least 50 years.

Archaeologist Ken Feder notes that unlike the situation in eastern Canada where evidence has been found that proves a Norse presence, nothing similar has been found anywhere near Heavener or even in the American Midwest. He suggests that “It is unlikely that the Norse would get significantly more fastidious about leaving any evidence behind of their presence in Oklahoma.”

In approximately fifty search trips, only two more carved stones were found in the Heavener area. In 1954 Ed Baker of Heavener described a stone carved with a large “turkey track” which had been used fifty years previously as a stepping-stone over a fence in a pasture near Morris Creek, which runs out of a canyon east of the Heavener Runestone. When he relocated it on the property of Joe Wilson, half of its 20-inch thickness was buried. On the top surface, which measured 30 by 14 inches, was pecked a 12-inch, three-pronged symbol on a stem, the runic “R”. Below it on the side surface was a small mark which later proved to be a “bindrune,” or combination of two runes. This stone is called “Heavener Runestone Number Two.”

By the time another stone carved with runes was rediscovered in 1959, we attempted to keep this rule. Wes Thomas relocated a stone on a high peak of Poteau Mountain, although he had not seen it in forty-five years. On it was carved an “X,” a “turkey track,” and an arrow shape: the runes for “G,” “R,” and “T,” respectively. The letters, 6 to 9 inches tall, appear in a triangular pattern on a stone 5 1/2 feet long, which was called “Heavener Runestone Number Three.”

The Poteau stone was found by schoolboys in 1967 near Poteau in Le Flore County, Oklahoma. It is carved into sandstone and is 15 inches long and shows little weathering. It was also contain letters from the Elder Futhark and Younger Fuhtark alphabet, but is not considered to have been created by the Vikings. The Shawnee stone was found in 1969 by three children in Shawnee, Oklahoma, one mile from the North Canadian River, which is a tributary of the Arkansas River. Both these runestones are considered to be the product modern period.