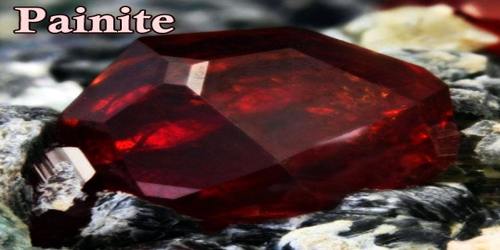 “Painite” was once considered one of the rarest minerals (borate mineral) on earth. It was first found in Myanmar by British mineralogist and gem dealer Arthur C.D. Pain who misidentified it as ruby until it was discovered as a new gemstone in the 1950s. When it was confirmed as a new mineral species, the mineral was named after him. For many years only two crystals of this hexagonal mineral were known to exist.

The chemical makeup of painite contains calcium, zirconium, boron, aluminum, and oxygen (CaZrAl9O15(BO3)). The mineral also contains trace amounts of chromium and vanadium, which are responsible for Painite’s typically orange-red to brownish-red color, similar to topaz. The crystals are naturally hexagonal in shape, and, until late 2004, only two had been cut into faceted gemstones.

In addition to zirconium, minor amounts of titanium and hafnium also are part of its composition. While it often appeared in lists of gemstones, only two faceted gemstones had been reported prior to mid-2005. The discovery of a new locality in northern Myanmar in 2002 and the discovery of major new localities in the Mogok area led to the recovery of several thousand crystals and fragments. Nearly complete crystals remain few in number and high-quality facet material remains rare, although several hundred crystals and pieces have been faceted to date. 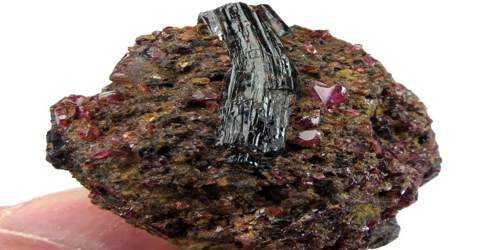 The first painite crystal, weighing 1.7 grams, was donated by Arthur C.D. Pain to the British Museum of Natural History in London. An earlier painite sample was discovered in the British Museum having been misidentified as brown tourmaline with rubies from Mogok, Burma. This sample was found to be painite by electron microprobe analysis in late 2007. A dark, 2.118-gram painite known as Painite #2 is currently on public display in the British Museum. Several painities are in private collections while there rest have been distributed among the British Museum, the Gemological Institute of America, the Smithsonian, the California Institute of Technology, and the Research Laboratory in Lucerne, Switzerland.

Although painites have a hardness of 8, great brilliance, and attractive red colors, they present some challenges for gem cutters. Even gem-quality rough is typically highly included and fractured. As a result, faceters tend to cut these gems small and shallow, which can impair their brilliance. The first two discovered painite specimens, weighing 1.7 and 2.118 grams, respectively, now reside in the Natural History Museum, London.

In early 2006, a large deposit of painite was found in Burma. The Painite crystals, however, were a thick maroon-brown with a significantly lower value than crystals found previously. This new deposit brought the total number of genuine painites known worldwide to 330.

Although “Painites” do have great resistance to scratching, they may also contain inclusions and fractures that make them susceptible to impacts from everyday wear or heat and vibrations from mechanical cleaning systems. Consult with a gemologist to evaluate your gemstone and determine the best way to set and clean such a rare piece. Otherwise, a soft brush, mild detergent, and warm water should pose no risks for painites.