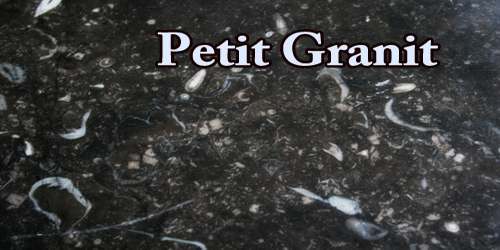 Given its name, the stone is a grey-bluish calcareous, rather than a pure granite. It is a Belgian calcareous stone used in patrimony, building, and sculpture. This consists of approximately 96 percent microcrystalline calcite and a small proportion of fossils, mostly crinoids. Also, there are some dolomite, quartz, pyrite, marcasite, and fluorite.

The rock sparkles shine like granite, for which it has earned it its nickname ‘small granite’ (Petit Granit). “Petit Granit” has an Appellation d’Origine Locale (Local Appellation of Origin) designation since 1999. Since the Middle Ages, it has been collected in many areas of southern Belgium. Upon polishing, the stone is glossy black and is considered an easy to work and flexible dimension stone.

The stone characterizes many facades in Brussels and other Belgian cities’ urban architecture, and has been employed in numerous countries in Europe and overseas since the middle of the 19th century. Its high density and uniformity mean that it takes a superb polish and thus has versatile use as a dimension stone.

Petit Granit has been designated by the International Union of Geological Sciences as a world Heritage Stone Resource. It is often processed into Honed, Aged, Polished, Sawn Cut, Sanded, Rock faced, Sandblasted, Bushhammered, Tumbled then on.