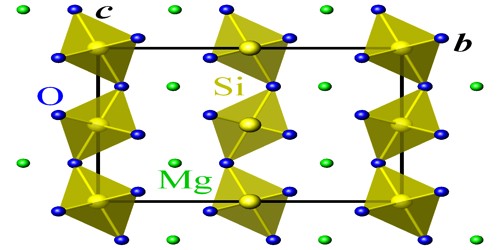 Post-perovskite (pPv) is a high-pressure phase of magnesium silicate (MgSiO3). It is a high-pressure phase of several minerals, including magnesium silicate. It is composed of the prime oxide constituents of the Earth’s rocky mantle (MgO and SiO2), and its pressure and temperature for stability imply that it is likely to occur in portions of the lowermost few hundred km of Earth’s mantle.

The CaIrO3-type phase of MgSiO3 phase was discovered in 2004 using the laser-heated diamond anvil cell (LHDAC) technique by a group at the Tokyo Institute of Technology and, independently, by researchers from the Swiss Federal Institute of Technology (ETH Zurich) and Japan Agency for Marine-Earth Science and Technology who used a combination of quantum-mechanical simulations and LHDAC experiments. Post-perovskite has the same crystal structure as the synthetic solid compound CaIrO3, and is often referred to as the “CaIrO3-type phase of MgSiO3” in the literature. The crystal system of post-perovskite is orthorhombic, its space group is Cmcm, and its structure is a stacked SiO6-octahedral sheet along the b axis. The name “post-perovskite” derives from silicate perovskite, the stable phase of MgSiO3 throughout most of Earth’s mantle, which has the perovskite structure. At upper mantle pressures, nearest Earth’s surface, MgSiO3 persists as the silicate mineral enstatite, a pyroxene rock-forming mineral found in igneous and metamorphic rocks of the crust.

The sheet structure of post-perovskite makes the compressibility of the b axis higher than that of the a or c axis. This anisotropy may yield the morphology of a platy crystal habit parallel to the (010) plane; the seismic anisotropy observed in the D” region might qualitatively (but not quantitatively) be explained by this characteristic. Theory predicted the (110) slip associated with particularly favorable stacking faults and confirmed by later experiments.