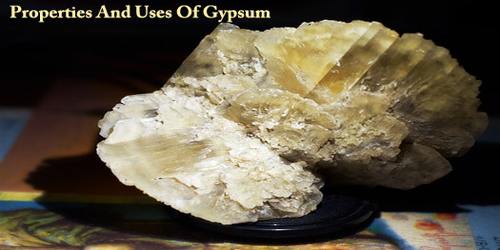 Properties And Uses Of Gypsum

Gypsum is an evaporite mineral most commonly found in layered sedimentary deposits in association with halite, anhydrite, sulfur, calcite, and dolomite. Gypsum (CaSO4.2H2O) is very similar to Anhydrite (CaSO4). The chemical difference is that gypsum contains two waters and anhydrite is without water. Gypsum is the most common sulfate mineral.

A massive fine-grained white or a lightly tinted variety of gypsum, called alabaster, has been used for sculpture by many cultures including Ancient Egypt, Mesopotamia, Ancient Rome, the Byzantine Empire, and the Nottingham alabasters of Medieval England. Gypsum also crystallizes as translucent crystals of selenite. It also forms as an evaporite mineral and as a hydration product of anhydrite.

Gypsum is found in a number of forms and is of great economic importance. It is colorless or white but can be tinted light brown, gray, yellow, green, or orange due to the presence of impurities. Single, well-developed crystals can be blocky with a slanted parallelogram outline, tabular, or bladed. Twinned crystals are common and frequently form characteristic “fishtails.” Numerous transparent, swordlike selenite gypsum crystals 61 ⁄2 ft (2 m) or more long can be found at the Cave of Swords, Chihuahua, Mexico, one of the world’s most spectacular mineral deposits. Gypsum occurs in extensive beds formed by the evaporation of ocean brine. It also occurs as an alteration product of sulfides in ore deposits and as volcanic deposits.

Gypsum is moderately water-soluble (~2.0–2.5 g/l at 25 °C) and, in contrast to most other salts, it exhibits retrograde solubility, becoming less soluble at higher temperatures. When gypsum is heated in air it loses water and converts first to calcium sulfate hemihydrate, (bassanite, often simply called “plaster”) and, if heated further, to anhydrous calcium sulfate (anhydrite). As for anhydrite, its solubility in saline solutions and in brines is also strongly dependent on NaCl (common table salt) concentration.

Gypsum crystals are found to contain anion water and hydrogen bonding. It is also formed as a spinoff of sulfide oxidation, among others by pyrite oxidation, while the sulfuric acid generated reacts with calcium carbonate. Its presence suggests oxidizing conditions. Under reducing conditions, the sulfates it contains can be reduced back to sulfide via sulfate-reducing bacteria. Electric strength stations burning coal with flue gas desulfurization produce large portions of its as a byproduct from the scrubbers.

Gypsum is used in a wide variety of applications:

Varieties of gypsum known as “satin spar” and “alabaster” are used for a variety of ornamental purposes; however, their low hardness limits their durability.