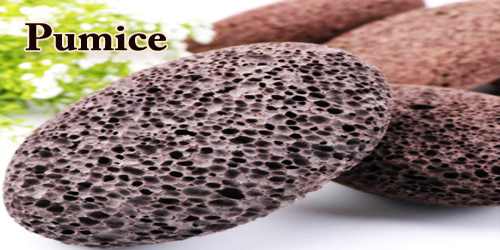 Pumice ( /ˈpʌmɪs/), called pumicite in its powdered or dust form, is a light-colored, extremely porous igneous rock that forms during explosive volcanic eruptions. Scoria is another vesicular volcanic rock that differs from pumice in having larger vesicles, thicker vesicle walls and being dark colored and denser.

It can be obtained in large chunks or thin powders. While most of the world’s supply of pumice is used in construction materials, it is also widely used as an abrasive in cleaning supplies both for personal use and for use around the home.

Pumice is created when super-heated, highly pressurized rock is violently ejected from a volcano. The unusual foamy configuration of pumice happens because of simultaneous rapid cooling and rapid depressurization. The depressurization creates bubbles by lowering the solubility of gases (including water and CO2) that are dissolved in the lava, causing the gases to rapidly exsolve (like the bubbles of CO2 that appear when a carbonated drink is opened). The simultaneous cooling and depressurization freezes the bubbles in a matrix. Eruptions under water are rapidly cooled and the large volume of pumice created can be a shipping hazard for cargo ships. The pores of pumice and pumicite can have sizes from a wide range. Namely, the size of the pores can be as large as parts of micrometre (μm) and more rough pores with sizes up to 2-3 mm.

Pumice is used as aggregate in lightweight concrete, as landscaping aggregate, and as an abrasive in a variety of industrial and consumer products. Many specimens have a high enough porosity that they can float on water until they slowly become waterlogged. 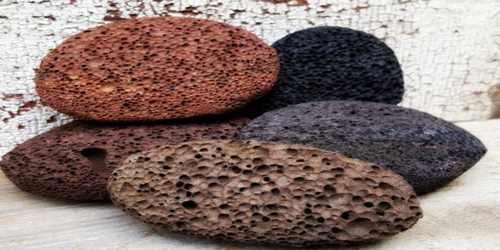 Sources and Properties of Pumice –

Pumice is mostly found in areas with volcanic fields, as it is a type of volcanic rock. Currently, fifty countries around the globe produce and manufacture pumice. The world’s largest producer of pumice is Italy, followed by Chile, Greece, Turkey, the United States and Spain. In America, the bulk of pumice used for production comes out of Arizona, California, Oregon and New Mexico.

In 2011, Italy and Turkey led pumice mining production at 4 and 3 million tonnes respectively; other large producers at or exceeding a million tonnes were Greece, Iran, Chile and Syria. Total world pumice production in 2011 was estimated at 17 million tonnes. About 500,000 metric tons of pumice and pumicite were mined in the United States in 2011. The total value of this pumice was about $11,200,000, or an average of about $23 per ton at the mine.

The mining of pumice is an environmentally friendly process compared with other mining methods because the igneous rock is deposited on the surface of the earth in loose aggregate form. The material is mined by open pit methods. Soils are removed by machinery in order to obtain more pure quality pumice. Scalping screens are used to filter impure surficial pumice of organic soils and unwanted rocks. Blasting is not necessary because the material is unconsolidated, therefore only simple machinery is used such as bulldozers and power shovels. Different sizes of pumice are needed for specific uses therefore crushers are used to achieve desired grades ranging from lump, coarse, intermediate, fine and extra fine.

Most pumice erupts from magmas that are highly charged with gas and have a rhyolitic composition. Rarely, pumice can erupt from gas-charged magmas of basaltic or andesitic composition. Pumice is commonly pale in color, ranging from white, cream, blue or grey, to green-brown or black.

Pumice forms when volcanic gases exsolving from viscous magma form bubbles that remain within the viscous magma as it cools to glass. Pumice is a common product of explosive eruptions (plinian and ignimbrite-forming) and commonly forms zones in upper parts of silicic lavas. Pumice has a porosity of 64-85% by volume and it floats on water, possibly for years, until it is eventually waterlogged and sinks.

Pumice is pyroclastic igneous rock that was almost completely liquid at the moment of effusion and was so rapidly cooled that there was no time for it to crystallize. When it solidified, the vapours dissolved in it were suddenly released, the whole mass swelling up into a froth that immediately consolidated. Had it cooled under more pressure, it would have formed a solid glass, or obsidian; in fact, if fragments of obsidian are heated in a crucible until they fuse, they will change to pumice when their dissolved gases are set free. Any type of lava, if the conditions are favorable, may assume the pumiceous state, but basalts and andesite do not occur as often in this form as do trachytes and rhyolites. 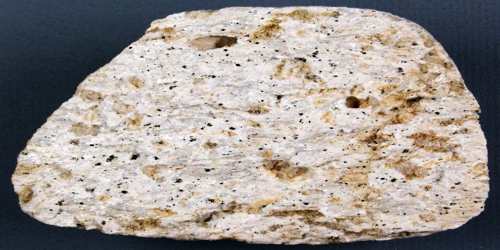 Occurrence and Formation of Pumice –

Pumice occurs in all the deposits that cover the floor of the deepest portion of the oceans and is especially abundant in the abyssal red clay. In some measure this pumice has been derived from submarine volcanic eruptions, but its presence is also accounted for by the fact that it will float on water for months and is thus distributed over the sea by winds and currents. After a long time it becomes waterlogged and sinks to the bottom, where it gradually disintegrates and is incorporated in the muds and oozes of the ocean floor.

Pumice is volcanic rock that is produced when lava with high water and gas content is thrown from a volcano. The light, rocky mineral is formed as a result of lava cooling and hardening. Pumice rocks are filled with small gas bubbles. Lava that hardens more quickly results in the formation of volcanic glass instead of pumice.

After the great eruption of Krakatoa in 1883, banks of pumice covered the surface of the sea for many kilometres and rose, in some cases, about 1.5 m (4 or 5 feet) above the water level. In addition, much finely broken pumice was thrown into the air to a great height and was borne away by the winds, ultimately settling in the most distant parts of the continents and oceans.

In 1979, 1984 and 2006, underwater volcanic eruptions near Tonga created large pumice rafts, some as large as 30 kilometers (19 mi) that floated hundreds of kilometres to Fiji. There are two main forms of vesicles. Most pumice contains tubular microvesicles that can impart a silky or fibrous fabric. The elongation of the microvesicles occurs due to ductile elongation in the volcanic conduit or, in the case of pumiceous lavas, during flow. The other form of vesicles are subspherical to spherical and result from high vapor pressure during eruption.

Pumice is widely used to make lightweight concrete and insulative low-density cinder blocks. The air filled vesicles in this porous rock serves as a good insulator. A fine-grained version of pumice called pozzolan is used as an additive in cement and is mixed with lime to form a light-weight, smooth, plaster-like concrete. This form of concrete was used as far back as Roman times. It was also commonly used as construction material for many aqueducts. One of the main uses of pumice currently in the United States is manufacturing concrete.

Pumice is widely used as an abrasive in soaps and cleaners. It is considered one of the softest abrasives on earth. Pumice is safe to use on the body because it is a natural mineral and is non-toxic. It can be used to remove grime and dirt as well as to exfoliate the skin. Pumice is also used in its natural rock form to wear down calluses and remove dead skin on the feet and hands.