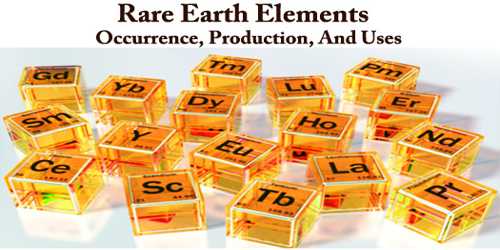 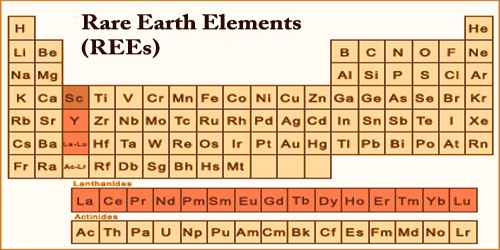 Occurrence and Production of REEs-

Rare-earth ore deposits are found all over the world. The major ores are in China, the United States, Australia, and Russia, while other viable ore bodies are found in Canada, India, South Africa, and southeast Asia. The major minerals contained in these ore bodies are bastnasite (fluorocarbonate), monazite (phosphate), loparite ((R,Na,Sr,Ca)(Ti,Nb,Ta,Fe3+)O3), and laterite clays (SiO2, Al2O3, and Fe2O3).

The rare-earth elements are often found together. The longest-lived isotope of promethium has a half-life of 17.7 years, so the element exists in nature in only negligible amounts (approximately 572 g in the entire Earth’s crust). Promethium is one of the two elements that do not have stable (non-radioactive) isotopes and are followed by (i.e. with higher atomic number) stable elements (the other being technetium). An economically viable source should contain more than 5 percent rare earths, unless they are mined with another product e.g., zirconium, uranium, or iron which allows economic recovery of ore bodies with concentrations of as little as 0.5 percent by weight.

Of the 83 naturally occurring elements, the 16 naturally occurring rare-earth elements fall into the 50th percentile of the elemental abundances. Promethium, which is radioactive, with the most stable isotope having a half-life of 17.7 years, is not considered to be naturally occurring, although trace amounts have been found in some radioactive ores. Cerium, which is the most abundant, ranks 28th, and thulium, the least abundant, ranks 63rd. Collectively, the rare earths rank as the 22nd most abundant “element” (at the 68th percentile mark). The non-lanthanide rare-earth elements, yttrium and scandium, are 29th and 44th, respectively, in their abundances.

Mines in Australia began producing rare earth oxides in 2011. In 2012 and 2013 they were supplying about 2% to 3% of world production. In 2012 the Mountain Pass Mine came back into production, and the United States produced about 4% of the world’s rare earth elements in 2013. Production in Brazil, Malaysia, Russia, Thailand, and Vietnam continued or increased.

New mineral resource assessments conducted by the United States Geological Survey identified significant resources outside of China. Although China is the world leader in rare earth production, they only control about 36% of the world’s reserves. This provides an opportunity for other countries to become important producers now that China is not selling rare earth materials below the cost of production.

Additionally, in 2010, a large deposit of rare-earth minerals was discovered in Kvanefjeld in southern Greenland. In central Spain, Ciudad Real Province, the proposed rare-earth mining project ‘Matamulas’ may provide, according to its developers, up to 2,100 Tn/year (33% of the annual UE demand). However, this project has been suspended by regional authorities due to social and environmental concerns. North Korea has been reported to have exported rare-earth ore to China, about US$1.88 million worth during May and June 2014.

Another recently developed source of rare earths is electronic waste and other wastes that have significant rare-earth components. New advances in recycling technology have made extraction of rare earths from these materials more feasible, and recycling plants are currently operating in Japan, where there is an estimated 300,000 tons of rare earths stored in unused electronics. In France, the Rhodia group is setting up two factories, in La Rochelle and Saint-Fons, that will produce 200 tons of rare earths a year from used fluorescent lamps, magnets and batteries. Coal and coal by-products are a potential source of critical elements including rare earth elements (REE) with estimated amounts in the range of 50 million metric tons.

As of 2017, known world reserves of Rare-Earth Elements or Minerals amounted to some 120 million metric tons of contained REO. China has the largest fraction (37 percent), followed by Brazil and Vietnam (18 percent each), Russia (15 percent), and the remaining countries (12 percent). With reserves this large, the world would not run out of rare earths for more than 900 years if demand for the minerals would remain at 2017 levels. Historically, however, demand for rare earths has risen at a rate of about 10 percent per year. If demand continued to grow at this rate and no recycling of produced rare earths were undertaken, known world reserves likely would be exhausted sometime after the mid-21st century.

The global demand for automobiles, consumer electronics, energy-efficient lighting, and catalysts is expected to rise rapidly over the next decade. Rare earth magnet demand is expected to increase, as is the demand for rechargeable batteries. New developments in medical technology are expected to increase the use of surgical lasers, magnetic resonance imaging, and positron emission tomography scintillation detectors.

Rare earth elements are heavily used in all of these industries, so the demand for them should remain high. 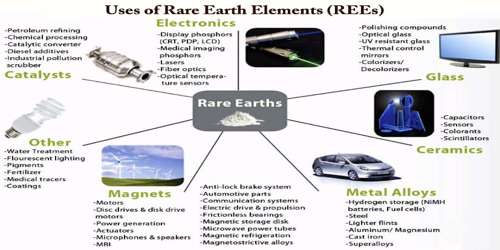 Rare Earth Elements (REEs) are not as “rare” as their name implies. Thulium and lutetium are the two least abundant rare earth elements but they each have an average crustal abundance that is nearly 200 times greater than the crustal abundance of gold. However, these metals are very difficult to mine because it is unusual to find them in concentrations high enough for economical extraction.

Other important uses of rare-earth elements are applicable to the production of high-performance magnets, alloys, glasses, and electronics. Ce and La are important as catalysts, and are used for petroleum refining and as diesel additives. Nd is important in magnet production in traditional and low-carbon technologies. Rare-earth elements in this category are used in the electric motors of hybrid and electric vehicles, generators in wind turbines, hard disc drives, portable electronics, microphones, speakers.

Considering the complexity of many modern electronic devices, recycling of rare earths must be done simultaneously with recycling of other valuable resources and potentially dangerous substances. These include precious metals (such as silver, gold, and palladium), nonferrous metals (such as aluminum, cobalt, nickel, copper, gallium, and zinc), carcinogens (such as cadmium), poisons (such as mercury, lead, and beryllium), plastics, glass, and ceramics.

Rear-Earth Elements (REEs) have been used in agriculture to increase plant growth, productivity, and stress resistance seemingly without negative effects for human and animal consumption. In addition, REEs are feed additives for livestock which has resulted in increased production such as larger animals and a higher production of eggs and dairy products. However, this practice has resulted in REE bio-accumulation within livestock and has impacted vegetation and algae growth in these agricultural areas. Additionally while no ill effects have been observed at current low concentrations the effects over the long term and with accumulation over time are unknown prompting some calls for more research into their possible effects.

Rare Earth Elements play an essential role in our national defense. The military uses night-vision goggles, precision-guided weapons, communications equipment, GPS equipment, batteries, and other defense electronics. Substitutes can be used for rare earth elements in some defense applications; however, those substitutes are usually not as effective and that diminishes military superiority.