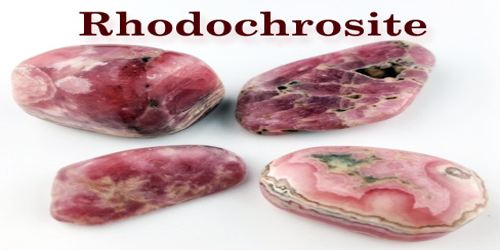 “Rhodochrosite” is a manganese carbonate mineral with chemical composition MnCO3. The word Rhodochrosite is derived from a Greek word “rhodon”, which means rose, and “chroma”, which means color. It is found in a small number of locations worldwide where other manganese minerals are usually present. In its (rare) pure form, it is typically a rose-red color, but impure specimens can be shades of pink to pale brown. It streaks white, and its Mohs hardness varies between 3.5 and 4. Its specific gravity is between 3.5 and 3.7. It crystallizes in the trigonal system, and cleaves with rhombohedral carbonate cleavage in three directions. Crystal twinning often is present. It is transparent to translucent with refractive indices of nω=1.814 to 1.816, nε=1.596 to 1.598. It is often confused with the manganese silicate, rhodonite, but is distinctly softer.

The Greek word for pink, the Rhodochrosite crystal meaning is associated with the rose, the symbol of love that can be traced back to the Incas, who called the stone “Inca Rose.” According to legend, these pink gems formed from the blood of their kings and queens. Ruled by the planet Venus, the Rhodochrosite crystal stone meaning comes from its healing pink hue, the color of love. Like the soft petals of a rose, Rhodochrosite stones and jewelry have sweet side effects like compassion, deeper emotional connections, and openness to love without judgment or expectations. The green leaves of the rose stem symbolize our potential for growth while the thorns remind us to face painful truths with loving awareness.

Rhodochrosite forms a complete solid solution series with iron carbonate (siderite). Calcium, (as well as magnesium and zinc, to a limited extent) frequently substitutes for manganese in the structure, leading to lighter shades of red and pink, depending on the degree of substitution. It is for this reason that the most common color encountered is pink.

Some facts about Rhodochrosite: 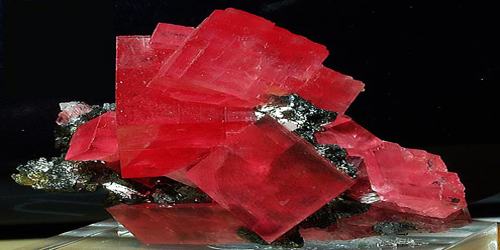 Occurrences and Properties of Rhodochrosite –

The formation of rhodochrosite usually occurs in fractures and cavities of metamorphic and sedimentary rocks. It is often associated with silver deposits, and a few silver mines produce rhodochrosite as a byproduct. This gemstone is found in Argentina, Namibia, the U.S.A., Mexico, South Africa, Spain and Romania.

It was first described in 1813 in reference to a sample from Cavnic, Maramureş, present-day Romania. According to Dimitrescu and Radulescu, 1966 and to Papp, 1997, this mineral was described for the first time in Sacaramb, Romania, not in Cavnic, Romania. The name is derived from the Greek word ῥοδόχρως meaning rose-colored.

Rhodochrosite is extremely rare as well-formed crystals. One of the few locations in the world where they are found is the Sweet Home Mine, near Alma, Colorado. Originally opened as a silver mine in 1873, the rhodochrosite was disregarded at that time. Then, as the popularity of mineral collecting increased, the well-formed crystals found at the Sweet Home Mine became many times more valuable than the lapidary material. Excellent, small, hand-size specimens currently sell for five-digit numbers. Broken or damaged crystals are sometimes used as faceting rough.

Rhodochrosite is a manganese carbonate mineral, which is also termed as also known as ‘Inca Rose Stone’, Manganese Spar, and Raspberry Spar. In its raw or typically pure form, it is red as a rose in color. It commonly contains minerals, like siderite, calcium, and iron, and belongs to the hexagonal crystal system. The hardness of Rhodochrosite varies between 3.5 and 4 on the Moh’s scale of hardness.

Rhodochrosite is generally easy to identify and is rarely confused with other minerals. Its pink color, perfect cleavage in three directions, low hardness, and weak effervescence with cold dilute hydrochloric acid are rarely seen in other minerals. The most common confusion is between the names “rhodochrosite” and “rhodonite” both are pink, manganese-rich minerals with very similar names that people have a hard time remembering.

Uses and Benefits of Rhodochrosite –

Rhodochrosite is a favorite gemstone of many people. It is often slabbed to show off its banded or concentric patterns. Most of the slabs are used to cut cabochons.

Its main use is as an ore of manganese, which is a key component of low-cost stainless steel formulations and certain aluminium alloys. Quality banded specimens are often used for decorative stones and jewelry. Due to its being relatively soft, and having perfect cleavage, it is very difficult to cut, and therefore rarely found faceted in jewelry. Manganese carbonate is extremely destructive to the amalgamation process used in the concentration of silver ores, and were often discarded on the mine dump.

Use Rhodochrosite crystal healing properties to connect the fiery energy of the sacral chakra with the heart. This loving vibration calms the heart and encourages stability when tensions are high. With the Rhodochrosite crystal included in people’s healing crystal first aid kit, witness an amazing healing transformation in their relationships when jealousy and anger evolve into forgiveness and loving acceptance.

On a cellular level, the Rhodochrosite calms and rebalances the nervous system, which promotes feelings of deep relaxation, a welcome prescription for managing stress and intense emotions.