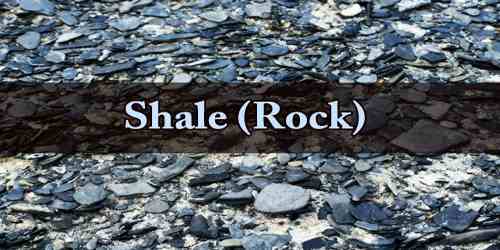 Shale is the most abundant of the sedimentary rocks, accounting for roughly 70 percent of this rock type in the crust of the Earth. It is a fine-grained, clastic sedimentary rock, composed of mud that is a mix of flakes of clay minerals and tiny fragments (silt-sized particles) of other minerals, especially quartz and calcite.

Shale typically exhibits varying degrees of fissility, breaking into thin layers, often splintery and usually parallel to the otherwise indistinguishable bedding plane because of the parallel orientation of clay mineral flakes. Non-fissile rocks of similar composition but made of particles smaller than 0.06 mm are described as mudstones (1/3 to 2/3 silt particles) or claystones (less than 1/3 silt). Rocks with similar particle sizes but with less clay (greater than 2/3 silt) and therefore grittier are siltstones.

Before the mid-19th century, the terms slate, shale and schist were not sharply distinguished. In the context of underground coal mining, shale was frequently referred to as slate well into the 20th century.

Shale is a rock composed mainly of clay-sized mineral grains. These tiny grains are usually clay minerals such as illite, kaolinite, and smectite. Shale usually contains other clay-sized mineral particles such as quartz, chert, and feldspar. Other constituents might include organic particles, carbonate minerals, iron oxide minerals, sulfide minerals, and heavy mineral grains. These “other constituents” in the rock are often determined by the shale’s environment of deposition, and they often determine the color of the rock. 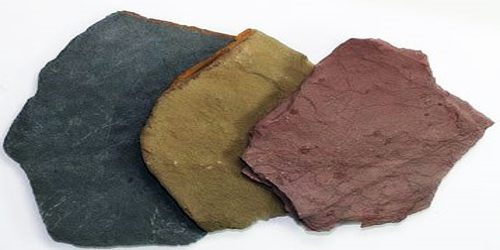 The addition of variable amounts of minor constituents alters the color of the rock. Black shale results from the presence of greater than one percent carbonaceous material and indicate a reducing environment. Black shale can also be referred to as black metal. ‘Black shales’ are dark, as a result of being especially rich in unoxidized carbon. Common in some Paleozoic and Mesozoic strata, black shales were deposited in anoxic, reducing environments, such as in stagnant water columns. Some black shales contain abundant heavy metals such as molybdenum, uranium, vanadium, and zinc. The enriched values are of controversial origin, having been alternatively attributed to input from hydrothermal fluids during or after sedimentation or to slow accumulation from seawater over long periods of sedimentation.

Green shales are occasionally found. This should not be surprising because some of the clay minerals and micas that make up much of the volume of these rocks are typically a greenish color.

Shales and mudrocks contain roughly 95 percent of the organic matter in all sedimentary rocks. However, this amounts to less than one percent by mass in average shale. Black shales, which form in anoxic conditions, contain reduced free carbon along with ferrous iron (Fe2+) and sulfur (S2−). Pyrite and amorphous iron sulfide along with carbon produce the black coloration.

Shales and the soils derived from them are some of the most troublesome materials to build upon. They are subject to changes in volume and competence that generally make them unreliable construction substrates. Shales that are subject to heat and pressure of metamorphism alter into a hard, fissile, metamorphic rock known as slate. With the continued increase in metamorphic grade the sequence is phyllite, then schist and finally gneiss.