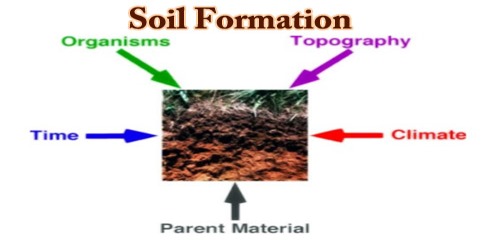 Soil is that the uppermost layer of Earth’s crust, formed by the continual weathering of mountains over thousands of years. It’s made from four basic constituents; minerals, organic materials, air, and water. The three main components to blame for its texture are; sand, silt, and clay. Depending upon these three constituents the mineral texture of the soil varies. Leaves and organic constituents decompose to make the upper organic layer, called humus. The humus content in soils plays an awfully important role in its fertility.

The evolution of soils and their properties is called soil formation, and pedologists have identified five fundamental soil formation processes that influence soil properties. These five “state factors” are parent material, topography, climate, organisms, and time.

Soil parent materials can include all different types of bedrock and any type of unconsolidated sediments, such as glacial deposits and stream deposits. Soils are described as residual soils if they develop on bedrock, and transported soils if they develop on transported material such as glacial sediments. But the term “transported soil” is misleading because it implies that the soil itself has been transported, which is not the case. When referring to such soil, it is better to be specific and say “soil developed on unconsolidated material,” because that distinguishes it from soil developed on bedrock.

Parent materials influence soil formation through their mineralogical composition, their texture, and their stratification (occurrence in layers). Dark-colored ferromagnesian (iron- and magnesium-containing) rocks, for instance, can produce soils with a high content of iron compounds and of clay minerals within the kaolin or smectite groups, whereas light-colored siliceous (silica-containing) rocks tend to provide soils that are low in iron compounds which contain clay minerals within the illite or vermiculite groups.

Parent materials provide important nutrients to residual soils. Some unconsolidated materials, such as river-flood deposits, make for especially good soils because they tend to be rich in clay minerals. Clay minerals have large surface areas with negative charges that are attractive to positively charged elements like calcium, magnesium, iron, and potassium important nutrients for plant growth.

Topography, when considered as a soil-forming factor, includes the following: the geologic structural characteristics of elevation above mean sea level, aspect (the compass orientation of a landform), slope configuration (i.e., either convex or concave), and relative position on a slope (that is, from the toe to the summit). Topography influences the way the hydrologic cycle affects earth material, principally with respect to runoff processes and evapotranspiration.

Soil erosion by water or wind removes A horizons and exposes B horizons to weathering. Major portions of entire soil profiles can move downslope suddenly by the combined action of water and gravity. Catastrophic natural events, such as volcanic eruptions, earthquakes, and devastating storms, can have obvious consequences for the instability of geomorphologic patterns.

Soils develop because of the weathering of materials on Earth’s surface, including the mechanical breakup of rocks, and therefore the chemical weathering of minerals. Soil development is facilitated by the downward percolation of water. Temperature and precipitation influence how fast parent materials weather and, thus, soil properties such as mineral composition and organic matter content. Temperature directly influences the speed of chemical reactions. The warmer the temperature, the faster reactions occur. Temperature fluctuations increase the physical weathering of rocks.

Climate influences soil formation primarily through the effects of water and solar energy. Water is the solvent in which chemical reactions take place in the soil, and it is essential to the life cycles of soil organisms. Water is also the principal medium for the erosive or percolative transport of solid particles. The rates at which these water-mediated processes take place are controlled by the amount of energy available from the sun. Chemical weathering reactions (especially the formation of clay minerals) and biochemical reactions proceed fastest under warm conditions, and plant growth is enhanced in warm climates. Too much water (e.g., in rainforests) can lead to the leaching of important chemical nutrients and hence to acidic soils.

Air plays the most important role as it transports a huge amount of soil from one place to another. Loose soils are carried away by the wind from one place to another. In principle, soil profile characteristics that are closely linked to climate can in turn be interpreted as climatic indicators. For example, a soil profile with two well-defined zones of lime accumulation, one shallow and one deep, may signal the existence of a past climate whose greater precipitation drove the lime layer deeper than the present climate is able to do.

Biotic agents have greatly affected the soil formation process. These include organisms that live in the soil, such as bacteria and gophers, and vegetation growing on the surface. Organisms such as earthworm live in the soil. They churn their way through it by eating it. This results in the production of nutrient-rich manure in the form of their excreta. Their movement in the soil helps in its mixing and aeration. Organisms in the soil can speed up or slow down soil formation. For example, microorganisms can facilitate chemical reactions or excrete organic substances to improve water infiltration in the soil. Other organisms such as gophers slow soil formation by digging and mixing soil materials and destroying soil horizons that have formed.

Soils formed under forests tend to be more weathered (older in soil terms) because forests grow in higher rainfall areas. There’s more water movement in the root zone and a smaller amount of organic matter forms. Soils formed in prairie tend to be in areas with less precipitation. Grasses tend to use the provided moisture, reducing the water movement through the soil profile. Organic matter forms in large quantities and to a deeper depth in the soil surface than forest soils.

Human beings are also part of the biological influx that influences soil formation. Human influence can be as severe as wholesale removal or burial (by urbanization) of an entire soil profile, or it can be as subtle as a gradual modification of organic matter by agriculture or of soil structure by irrigation. The chemical and physical properties of soils critical to the growth of crops often are affected significantly by cultural practices. Among the problems created for agriculture by cultural practices themselves are loss of arable land, erosion, the buildup of salinity, and the depletion of organic matter.

Even under ideal conditions, the soil takes thousands of years to develop. The soil-forming factors of parent material and topography are largely site-related (attributes of the terrain), whereas those of climate and organisms are largely flux-related (inputs from the surroundings). The degree of aging depends on the intensity of the other four soil-forming factors. Factors that slow soil formation include: