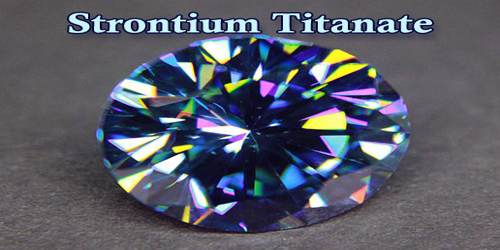 “Strontium Titanate” (SrTiO3) is an oxide of strontium and titanium or is a classical high-permittivity perovskite material known since the 1940s. At room temperature, it is a centrosymmetric paraelectric material with a perovskite structure like CaTiO3. At low temperatures it approaches a ferroelectric phase transition with a very large dielectric constant ~104 but remains paraelectric down to the lowest temperatures measured as a result of quantum fluctuations, making it a quantum paraelectric. It was long thought to be a wholly artificial material, until 1982 when its natural counterpart discovered in Siberia and named tausonite was recognized by the IMA. Tausonite remains an extremely rare mineral in nature, occurring as very tiny crystals. Its most important application has been in its synthesized form wherein it is occasionally encountered as a diamond simulant, in precision optics, in varistors, and in advanced ceramics.

The name tausonite was given in honor of Lev Vladimirovich Tauson (1917-1989), a Russian geochemist. Disused trade names for the synthetic product include strontium mesotitanate, Fabulite, Diagem, and Marvelite. Other than its type locality of the Murun Massif in the Sakha Republic, natural tausonite is also found in Cerro Sarambi, Concepción department, Paraguay; and along the Kotaki River of Honshū, Japan.

Between the early 1950s and the early 1970s, Fabulite, Diagem, and the other strontium titanate brands were popular sellers. Then, many people who purchased strontium titanate jewelry and wore it regularly began to notice that their stones were showing signs of wear. The facet faces were often scratched, and facet edges were often nicked and chipped. A material with a Mohs hardness of 5.5 does not stand up to wear like a diamond with a hardness of 10, or ruby and sapphire with a hardness of 9.

However, strontium titanate has a “fire” that greatly exceeds the fire of a diamond. “Fire” is the ability of a gem to act as a prism and separates light passing through it into a rainbow of colors. The fire of strontium titanate is so strong that it immediately surprises the observer. 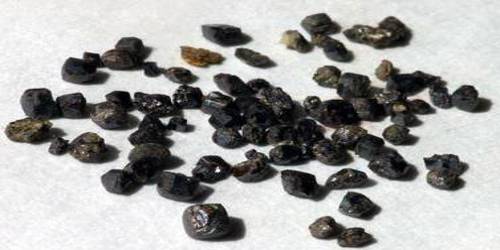 Purely synthesized Strontium Titanate (SrTiO3) is colorless in appearance, and when it is faceted it creates a brilliant, intense fire, also known as dispersion. This fire is four times greater than that which is seen in diamonds of a similar cut! The inclusion of rare-earth metals, through a process known as doping, can produce many varieties of color within this gem, such as red and yellow. As a synthetic gemstone, strontium Titanate is usually free of inclusions, however, on occasion; a bubble can be seen within the stone.

Strontium Titanate does not have the hardness and toughness of diamond, and that was a problem. It has a hardness of 5.5 low enough that contact with many common objects could result in a scratch or a damaged facet edge.

Strontium Titanate is both much denser (specific gravity 4.88 for natural, 5.13 for synthetic) and much softer (Mohs hardness 5.5 for synthetic, 6-6.5 for natural) than diamond. Its crystal system is cubic and its refractive index (2.410 as measured by sodium light, 589.3 nm) is nearly identical to that of diamond (at 2.417), but the dispersion (the optical property responsible for the “fire” of the cut gemstones) of strontium titanate is 4.3x that of diamond, at 0.190 (B-G interval). This results in a shocking display of fire compared to diamond and diamond simulants such as YAG, GAG, GGG, Cubic Zirconia, and Moissanite.

Naturally occurring strontium titanate was not known as a mineral until its discovery in 1982. It was first found in Eastern Siberia, Russia, and later occurrences were found in Paraguay and Japan. It is a very rare mineral, found in tiny cubic crystals, crystal clusters, and irregular masses. Natural specimens are typically so small and so rare that they have no commercial use beyond mineral specimens.

Strontium Titanate (SrTiO3) in the perovskite structure is a very attractive material for application to microelectronics because of its high charge storage capacity, good insulating properties and excellent optical transparency in the visible region and chemical stability. In the past, due to lattice parameter match, SrTiO3 was largely employed as substrate for epitaxial growth of high temperature superconducting films.

Given below are some of the chief applications of strontium titanate (SrTiO3):

Strontium Titanate (SrTiO3) is almost always faceted, as it’s primarily used as a simulated diamond. It is commonly available in all calibrated fancy cuts seen in the market today. As a simulated diamond, the stone can be distinguished from diamond by its lower hardness on the Mohs scale, and its dispersion of light.