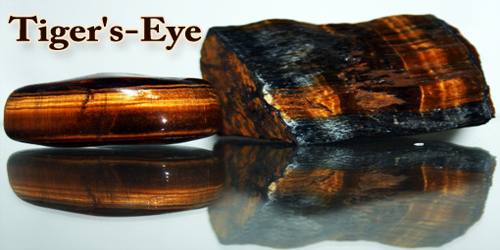 Tiger’s-Eye (also called “tiger eye”) is a very popular gemstone that displays a chatoyancy (cat’s-eye) when a polished stone is moved back and forth in incident light. It is a quartz gemstone, usually amber to brown in color that forms when fibers of the mineral crocidolite are replaced by silica.

This structure of parallel fibers is preserved in the stone, and the chatoyant “eye” crosses the parallel fibers at right angles. The best specimens of tiger’s-eye are usually cut en cabochon in an orientation that yields the best display of chatoyancy.

The gem has a rich yellow to yellow-brown or brown color and, when polished, a fine golden lustre. The best stones come from Griqualand West, S.Af. Hawk’s-eye is similar to tiger eye, except that the crocidolite was replaced by quartz before altering to iron oxide; it, therefore, retains the gray-blue or green of the asbestos. 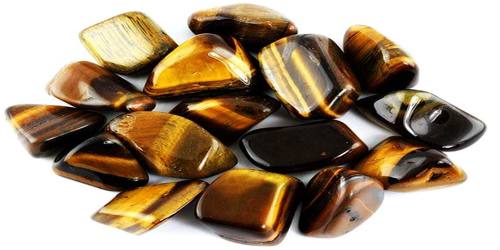 Sources and Forms of Tiger’s-Eye –

The largest numbers of Tiger Eye Stones are found in South Africa, but it also comes from Brazil, India, Burma, Western Australia, and the USA. In some parts of the world, the stone is believed to ward off the evil eye.

Tiger’s-Eye is frequently used as a rough in the production of tumbled stones. It has a hardness of 7 and tumbles well with other quartz gemstones and with agates or jaspers. It easily takes a high polish in a rock tumbler and is suitable for beginning to experienced tumblers.

Tiger iron is an altered rock composed chiefly of tiger’s eye, red jasper and black hematite. The undulating, contrasting bands of color and lustre make for an attractive motif and it is mainly used for jewellery-making and ornamentation. Tiger iron is a popular ornamental material used in a variety of applications, from beads to knife hilts.

Tiger iron is mined primarily in South Africa and Western Australia. Tiger’s eye is composed chiefly of silicon dioxide (SiO2) and is coloured mainly by iron oxide. The specific gravity ranges from 2.64 to 2.71. It is formed by the alteration of crocidolite.

Serpentine deposits in which are occasionally found chatoyant bands of chrysotile fibres have been found in the US states of Arizona and California. These have been cut and sold as “Arizona tiger-eye” and “California tiger’s eye” gemstones. The trade name of pietersite is used for a fractured or brecciated chalcedony containing amphibole fibers and promoted as tiger’s eye from Namibia and China.

Uses and Benefits of Tiger’s-Eye –

Most tiger’s-eye used as a gemstone is brown in color. A similar material with a gray-blue color is known as “hawk’s-eye.” Red, blue, and green tiger’s-eye are often sold as finished stones. These colored stones are usually treated with heat or dye.

Gems are usually given a cabochon cut to best display their chatoyance. Red stones are developed by gentle heat treatments. Dark stones are artificially lightened to improve color using a nitric acid treatment. Honey-colored stones have been used to imitate the more valued cat’s eye chrysoberyl (cymophane), but the overall effect is often unconvincing. Artificial fibre optic glass is a common imitation of tiger’s eye, and is produced in a wide range of colors.

Tiger’s-eye cabochons are very popular ring stones. They are one of the most common stones used in men’s rings and cufflinks. It is also frequently cut into beads for use in necklaces and earrings. Tiger’s-eye cabochons are used in pins, earrings, pendants, and many other jewelry items. Stones with a light honey color are especially popular. Tiger’s-eye is frequently used for small sculptures and for producing tumbled stones. It is considered a semiprecious stone.

Tiger’s Eye is a stone of protection that is also very stabilizing and grounding. It enhances integrity, willpower, self-confidence, practicality and correct use of power. It is a stone that enhances good luck, and brings prosperity, often in the form of money. Tiger’s eye is also a very protective stone which is especially protective during travel. It can also help one see clearly without illusion. Tiger’s eye brings a special boost to the solar plexus chakra and to one’s personal power.