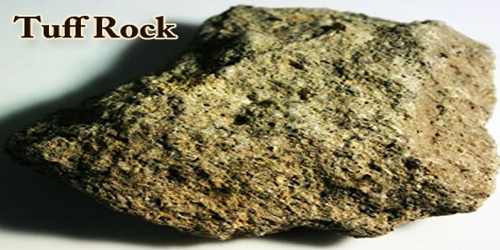 Tuff (from the Italian tufo), also known as volcanic tuff, is an igneous rock that forms from the products of an explosive volcanic eruption. In these eruptions, the volcano blasts rock, ash, magma and other materials from its vent. This ejecta travels through the air and falls back to Earth in the area surrounding the volcano. If the ejected material is compacted and cemented into a rock, that rock will be called “tuff”, particularly when used as construction material, but geologically tufa is a limestone precipitated from groundwater. Rock that contains greater than 50% tuff is considered tuffaceous.

Tuff can be classified as either sedimentary or igneous rock. They are usually studied in the context of igneous petrology, although they are sometimes described using sedimentological terms. It is a relatively soft rock, so it has been used for construction since ancient times. Since it is common in Italy, the Romans used it often for construction. The Rapa Nui people used it to make most of the moai statues in Easter Island.

Some tuff deposits are hundreds of meters thick and have a total eruptive volume of many cubic miles. That enormous thickness can be from a single eruptive blast or, more commonly, from successive surges of a single eruption – or eruptions that were separated by long periods of time. 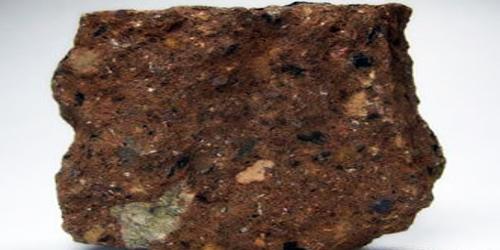 Classification and Compositions of Tuff –

Tuffs may be grouped as vitric, crystal, or lithic when they are composed principally of glass, crystal chips, or the debris of pre-existing rocks, respectively. Some of the world’s largest deposits of vitric tuff are produced by eruptions through a large number of narrow fissures rather than from volcanic cones.

Welded Tuff – Welded tuff is a pyroclastic rock that was sufficiently hot at the time of deposition to weld together. If the rock contains scattered, pea-sized fragments or fiamme in it, it is generally called a welded lapilli-tuff. During welding, the glass shards and pumice fragments stick together, deform and compact.

Rhyolitic Tuff – Tuff is generally classified according to nature of the volcanic rock of which it consists. Rhyolite tuffs contain pumiceus, glassy fragments and small scoriae with quartz, alkali feldspar, biotite, etc. The broken pumice is clear and isotropic, and very small particles commonly have crescentic, sickle-shaped, or biconcave outlines, showing that they are produced by the shattering of a vesicular glass, sometimes described as ash-structure.

Trachyte Tuff – Trachyte tuffs contain little or no quartz, but much sanidine or anorthoclase and sometimes oligoclase feldspar, with occasional biotite, augite, and hornblende. In weathering, they often change to soft red or yellow clay-stones, rich in kaolin with secondary quartz.

Andesitic Tuff – In color, they are red or brown; their scoriae fragments are of all sizes from huge blocks down to minute granular dust. The cavities are filled with many secondary minerals, such as calcite, chlorite, quartz, epidote, or chalcedony; in microscopic sections, though, the nature of the original lava can nearly always be made out from the shapes and properties of the little crystals which occur in the decomposed glassy base.

Basaltic tuff – Basaltic tuffs are also of widespread occurrence both in districts where volcanoes are now active and in lands where eruptions have long since ended. They are black, dark green, or red in colour; vary greatly in coarseness, some being full of round spongy bombs a foot or more in diameter; and being often submarine, may contain shale, sandstone, grit, and other sedimentary material, and are occasionally fossiliferous.

Ultramafic Tuff – Ultramafic tuffs are extremely rare; their characteristic is the abundance of olivine or serpentine and the scarcity or absence of feldspar and quartz. Rare occurrences may include unusual surface deposits of maars of kimberlites of the diamond-fields of southern Africa and other regions. The principal rock of kimberlite is a dark bluish-green, serpentine-rich breccia (blue-ground) which when thoroughly oxidized and weathered becomes a friable brown or yellow mass (the “yellow-ground”).

In extensive deposits, tuff may vary greatly not only in texture but also in chemical and mineralogical composition. There has probably been no geological period entirely free from volcanic eruptions; tuffs therefore range in age from Precambrian to Recent. Most of the older ones have lost all original textures and are thoroughly recrystallized; many old basaltic tuffs are represented by green chlorite and hornblende schists and many rhyolitic tuffs by sericite schists.

The material that is expelled in a volcanic eruption can be classified into three types:

Volcanic gases, a mixture made mostly of steam, carbon dioxide, and a sulfur compound (either sulfur dioxide, SO2, or hydrogen sulfide, H2S, depending on the temperature)

Lava, the name of magma when it emerges and flows over the surface

Tephra, chunks of solid material of all shapes and sizes ejected and thrown through the air

Tephra is made when magma inside the volcano is blown apart by the rapid expansion of hot volcanic gases. Magma commonly explodes as the gas dissolved in it comes out of solution as the pressure decreases when it flows to the surface. These violent explosions produce solid chunks of material that can then fly from the volcano. Chunks smaller than 2 mm in diameter (sand-sized or smaller) are called volcanic ash.

Apart from adventitious material, such as fragments of the older rocks, pieces of trees, etc., the contents of an ash deposit may be described as consisting of more or less crystalline igneous rocks. If the lava within the crater has been at such a temperature that solidification has commenced, crystals are usually present. They may be of considerable size like the grey, rounded leucite crystals found on the sides of Vesuvius. Many of these are very perfect and rich in faces because they grew in a medium that was liquid and not very viscous.

In some eruptions, foaming magma wells to the surface as an emulsion of hot gases and incandescent particles; the shredded pumaceous material spreads swiftly, even over gentle gradients, as a glowing avalanche (nuée ardente) that may move many kilometres at speeds greater than 160 km (100 miles) per hour. After coming to rest, the ejecta (erupted matter) may be firmly compacted by adhesion of the hot glass fragments to form streaky, welded tuffs (ignimbrites) such as those covering vast areas in New Zealand, Guatemala, Peru, and Yellowstone National Park in the United States. When explosions occur underground, the fragmental material may be forced violently into the surrounding rocks, forming intrusive tuffs (peperites).

Tuff also varies by particle size. Near the vent, a tuff might consist mainly of large blocks of material in a volcanic ash matrix. With distance from the vent, the clasts will be smaller in size. At the edges of the rock unit, the tuff might be mainly composed of very fine ash.

“Tuff” is a name that is used for a broad range of materials. The only requirement is that the materials are ejecta produced by a volcanic eruption. Tuff can contain fragments of dust-size particles to boulder-size particles and be composed of many different types of material.

The peperino, much used at Rome and Naples as a building stone, is a trachyte tuff. Pozzolana also is a decomposed tuff, but of basic character, originally obtained near Naples and used as a cement, but this name is now applied to a number of substances not always of identical character. In the Eifel region of Germany, a trachytic, pumiceous tuff called trass has been extensively worked as a hydraulic mortar.

Tuff from Rano Raraku was used by the Rapa Nui people of Easter Island to make the vast majority of their famous moai statues. Tuff is important in Armenian architecture.