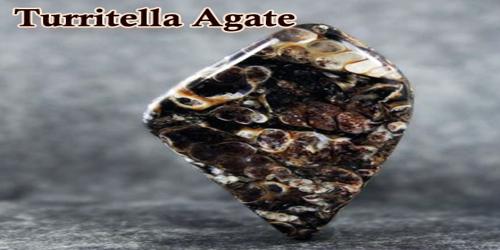 “Turritella Agate” is a great healing crystal that overcomes bitterness and negativity of our hearts. Apart from that, it gets rid of anger and foster love. It is the popular name used for a brown, translucent to semi-transparent, fossiliferous agate found in the Green River Formation of Wyoming in the United States. It is very easy to recognize because it contains large fossil snails that stand out in a white-to-tan color that contrasts with the brownish agate.

Turritella Agate, on the other hand, makes a sense of security and safety through dissolving internal tensions. This organic gem material was incorrectly named decades ago when the christener thought that the spectacular spiral-shaped gastropod (snail) fossils entombed within the stone were members of the marine Turritella genus. That was a mistake. Instead, the fossils are of the freshwater snail, Elimia tenera, a member of the Pleuroceridae family.

“Turritella Agate” is a type of Chalcedony, which belongs to the Quartz family of minerals. Agate is named after the Achetes River in Sicily, which is where Agate stones were first discovered. It’s also been found with various artifacts from the Neolithic people who used it for energy balancing and ornaments. Agates were used in Greek and Egyptian cultures as well as in Africa, Russia, and the Middle East. When the stone was first discovered, they thought that the fossils were of the marine Turritella genus, but instead, the fossils are from the freshwater snail, Elimia tenera, which is from the Pleuroceridae family. Since it was already called Turritella in publications it’s continued to be named this even though it’s not totally accurate.

The name “Turritella” went wild in lapidary magazines, gem, mineral, and fossil books, catalogs, and exhibits. Today it is typically seen without a corrective note in all of those sources, along with websites, online auctions, and computer software. Only a fraction of the people who have collected the material, cut it into cabochons, sold it, bought it, or worn it in jewelry have any knowledge that Elimia is a more appropriate name. 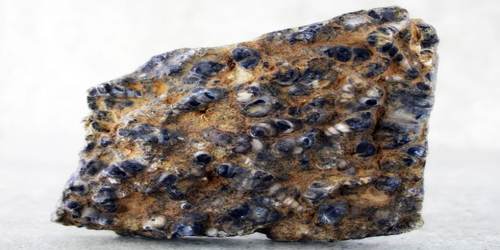 Meanings and Properties of Turritella Agate –

Turritella Agate mainly found in the United States in the Rocky Mountain region. Small amounts of dissolved microcrystalline silica in the groundwater began to precipitate, possibly in the form of a gel, within the cavities of the snail shells and the empty spaces between them. Over time, the entire mass of fossils was silicified, forming the brown fossiliferous agate (also known as chalcedony) that we know today as Turritella agate.

The term ‘Agate’ actually comes from Sicily, specifically in the Achates River in which the agate was first discovered. Usually, agate has eye markings, fossilized inclusions, specks of colors, bands, or stripes.

Turritella Agate is of the Chalcedony variety, which is a part of the Quartz family. The stone is known as a beautiful and unique stone material. As a matter of fact, it could be created into clock faces, bookend, lapidary craft stuff, and bookends especially when silicified completely. Turritella Agate creates cabochons. Actually, it is also very stunning material that you can use to make belt buckles, pendants, bolos, rings, as well as earrings.

Turritella Agate is brown or black in color with interesting fossils embedded within the stones. It was formed about 50 million years ago, in the Eocene epoch, while the Rocky Mountains were almost finished forming in Utah, Wyoming, and Colorado. As sediments collected in lakes and rivers to form rock and many different fossils were filled with silica and captured within the rock creating Turritella Agate. The Green River Formation is one of the most well-known rocks to find these incredible stones. These stones can be used to create bookends and clock faces, as well as personal items like jewelry and belt buckles. The stones are fairly affordable but prices increase with fossil size and detail.

Turritella Agate is known as a spiritual stone. As a matter of fact, it is intensely connected to the home and even to the earth. Another reason why you should try this stone is that it is related to your ancestry and personal roots.

People will wear or hold this stone or have it around them to feel more grounded and rooted. Keep it with them as they are doing any research and balancing in regards to their family or ancestry.

Turritella Agate may also get rid of people’s fears as well as improve their intuition. Nevertheless, this stone promotes spiritual, emotional, and intellectual maturity.