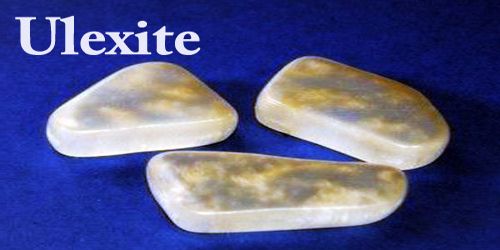 Ulexite (NaCaB5O6(OH)6·5H2O, hydrated sodium calcium borate hydroxide), occurs with a silky luster as fibrous white or grey to colorless, clear, or translucent crystals. The white are the most popular nodular, rounded, or lens-like crystal aggregates (often resembling cotton balls). For its fiber-optical properties, it is often referred to as “television rock” or “TV rock”. Ulexite was named for the German chemist Georg Ludwig Ulex (1811–1883) who first discovered it. 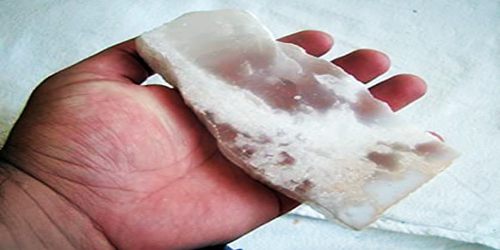 Ulexite occurs with minerals including borax, colemanite, hydroboracite, and other minerals from the borate. This stone is located in the United States, in Chile, and in Kazakhstan. It is a structurally complex mineral, with a basic structure that includes sodium, water, and octahedra hydroxide chains. Calcium, water, hydroxide, and oxygen polyhedra and large units of boron bind the chains together. Ulexite is also associated with the mineral borax, which is collected directly from water evaporation in intermittent lakes called playas in arid regions.

Owing to runoff from nearby mountains the playas form only during rainy seasons. The runoff is rich in the boron element and is highly concentrated in the arid climate through evaporation. The boron units have a formula of (B5O6(OH)6)3– and a charge of −3. They have composed of three tetrahedra borate and two triangular borate groups. Ultimately the concentration is so high that ulexite, borax, and other boron mineral crystals form and grow to high thickness.

Typical occurrences are in saline playas (dry lakes) and marshes, as in Esmeralda County, Nevada; in Death Valley and Kramer District, California; in Chile’s nitrate area, where it is widespread; and in the Maritime Provinces of Canada. Ulexite is usually found related to colemanite, borax, meyerhofferite, hydroboracite, probertite, glauberite, trona, mirabilite, calcite, gypsum, and halite. Ulexite fibers serve as optical fibers, transmitting light by internal reflections along their lengths. When a piece of ulexite is cut perpendicular to the direction of the fibers with smooth polished faces, a good quality specimen will show a picture of whatever surface is opposite to the other side.

Ulexite helps physical vision recover and relax. It can be used to help improve our eyesight and resolve blurred or double vision eye loss. It will remove wrinkles and it will relieve headaches. This stone can help the nervous system resolve its difficulties, especially with unexplained stabbing nerve pain. Ulexite is going to boost our memory and our focus. Ulexite occurs along with large-scale gypsum deposits and Na-Ca borates in salt playas and dry saline lakes. There are no known Ulexite polymorphs nor does Ulexite form a sequence of solid solutions with any other minerals. 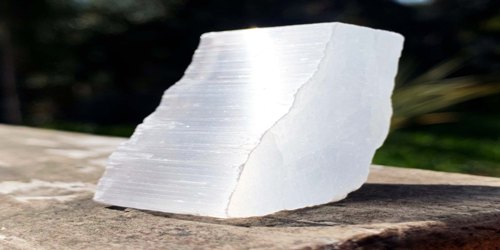 Ulexite crystals are around 1-3 μm thick and 50-80 μm long, arranged in loosely packed overlapping bundles with random orientation (Papezil and Fong, 1975). The crystals usually have six to eight faces, with three to six end faces (Murdoch, 1940). The best way to help people heal from and avoid brainwashing by religion or by strict political or religious regimes is this stone. Ulexite boosts and stimulates innovation, especially in business. Ulexite will put them back into perspective if people believe things are bigger than they actually are.

The precious stone propensities and method of event recognize Ulexite from basically all different minerals. Sinewy Ulexite may take after asbestos minerals, yet it just happens in explicit areas where asbestos minerals don’t exist. Ulexite can also look like Kernite but the distinctive taste of Kernite will instantly distinguish between the two. Calcium carbonate occurs as a by-product additionally when ulexite is dissolved in a carbonate solution. This by-product is employed in large amounts by the pulp and paper industry as a paper filler and as a coating for the paper that permits for improved printability.