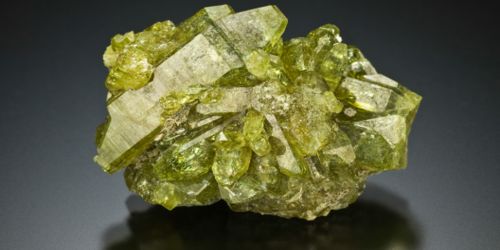 Vesuvianite, also known as idocrase, is a green, brown, yellow, or blue silicate mineral. It is named after the Mount Vesuvius, where it was first discovered in 1795. It can be faceted or used in its massive form as a substitute for Jade. It is a somewhat rare and beautiful mineral that can rival many other minerals for interest among mineral collectors.

A sky bluish variety known as cyprine has been reported from Franklin, New Jersey, and other locations; the blue is due to impurities of copper is a complex calcium aluminum sorosilicate. Californite is a name sometimes used for jade-like vesuvianite, also known as California jade, American jade or Vesuvianite jade. Xanthite is a manganese-rich variety. The specific gravity is 3.4 and the hardness 6 1⁄2. The name “vesuvianite” was given by A. G. Werner in 1795, because fine crystals of the mineral are found at Vesuvius; these are brown in color and occur in the ejected limestone blocks of Monte Somma.

Vesuvianite occurs as tetragonal crystals in skarn deposits and limestones that have been subjected to contact metamorphism. It was first discovered within included blocks or adjacent to lavas on Mount Vesuvius, hence its name. Attractive-looking crystals are sometimes cut as gemstones. Localities which have yielded fine crystallized specimens include Mount Vesuvius and the Ala Valley near Turin, Piedmont.