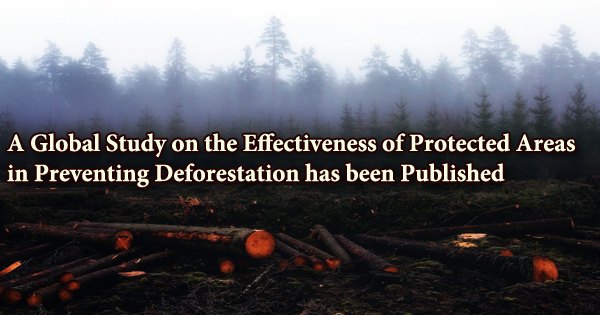 Global research on the usefulness of protected areas in avoiding deforestation has been released. The study, which was just published in Environmental Research Letters, looked at how successful country-level protected areas are in reducing forest loss and used machine learning to discover some of the elements that lead to these disparities.

Dr. Payal Shah, a research scientist at the Okinawa Institute of Science and Technology (OIST) who specializes in applying economic theory to conservation, said, “Protected areas are a key conservation tool that are essential for stemming the tide of biodiversity and habitat loss across the Earth.”

She added: “Scientists are urging the protection of 30% of land and ocean by 2030. However, as more land is protected, it’s becoming more necessary to assess how well each protected area is performing so that policymakers can make better judgments about future conservation efforts.”

The study relied on satellite data on forest cover from the years 2000 to 2012, with an emphasis on protected areas developed during that time period. Countries that have not protected a significant enough area of land were excluded from the study.

3.2 million square kilometers of land had been designated as protected in the 81 nations that remained in the analysis. By comparing changes in forest cover between protected and statistically similar unprotected regions, the study team was able to determine how successful these protected areas were. The land regions were matched based on a variety of variables that are key predictors of deforestation, such as their distance from towns, height above sea level, and slope.

“The aim was to try and understand how much deforestation would have occurred in an alternative scenario if an area had not been placed under protection,” explained Dr. Shah.

“This means that protected areas, on the whole, reduced deforestation by 72%, which is great news,” said Dr. Shah. “But when you start breaking down the data by country, the results are more mixed.”

Protected regions in some nations fared much better than other countries in their region, according to the research. For the areas of Africa, Asia, Europe, North America, South America, and Oceania, South Africa, Cambodia, Latvia, Guatemala, Uruguay, Brazil, and New Zealand led the way.

“The countries in each region are battling against similar key drivers of deforestation, such as timber logging or wildfires, so theoretically, every country has the potential to do equally well,” said Dr. Shah. “But we are seeing these huge disparities in the effectiveness of their protected areas. So of course, we then want to understand the underlying factors.”

The strictness of the protected zones was one of the key factors discovered. Strictness levels are determined by the amount of human activity or natural resource usage permitted on the area. More rigorously protected areas were more successful in most nations than less strictly protected regions.

The researchers then entered data on each country’s demographics, agriculture, economics, and politics into a machine learning algorithm, which found the characteristics that were most closely connected to the efficacy of the country’s protected area network.

Protected area efficacy was shown to be higher in countries with high levels of economic growth. Meanwhile, nations with higher levels of agricultural activity tended to have less effective protected areas, especially those with poor governance and rapidly increasing rural populations.

“This was expected as agriculture and deforestation often go hand in hand,” explained Dr. Shah. “Land is a limited resource so in countries with high agricultural activity, there may be large deforestation pressure within protected areas in countries that lack proper governance.”

The researchers stressed, however, that further in-depth study on a country-by-country basis is needed to confirm the causes for these correlations.

“As a global analysis, this study allows us to pinpoint which countries are doing well, and which are doing less well,” said Dr. Shah. “We can then carry out more targeted research in these countries to help support more effective conservation strategies.”