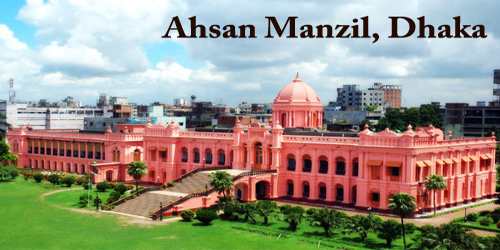 Ahsan Manzil (Bengali: আহসান মঞ্জিল, romanized: Ahsan Monzil) situated at Kumartoli of Dhaka on the bank of the Buriganga River, was the residential palace and the kachari of the nawabs of Dhaka. Construction was started in 1859 and was completed in 1872. It was constructed in the Indo-Saracenic Revival architecture. It was said to be the Rang Mahal of Sheikh Enayetullah, a zamindar of Jamalpur pargana (Barisal) during the time of the Mughals. Having purchased it from his son Matiullah, the French made it their trading centre. It has been turned into a museum recently. 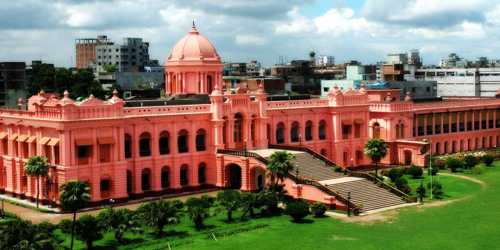 In the Mughal period, there was a garden house of Sheikh Enayet Ullah, the landlord of Jamalpur Porgona (district), in this place. Sheikh Enayet Ullah was a very charming person. He acquired a very big area in Kumortuli (Kumartuli) and included it in his garden house. Here he built a beautiful palace and named it “Rongmohol” (Rangmahal). He used to enjoy here keeping beautiful girls collected from the country and abroad, dressing them with gorgeous dresses and expensive ornaments.

There is a saying that, the foujdar of Dhaka (representative of mughal emperor) was attracted to one of the beautiful girls. He invited Sheikh Enayet Ullah to a party one night and killed him in a conspiracy when he was returning home. That girl also committed suicide in anger and sorrow. There was a grave of Sheikh Enayet Ullah in the north-east corner of the palace yard which was ruined in the beginning of the 20th century.

In about the year 1740, Sheikh Motiullah, the son of Sheikh Enayet Ullah, sold the Graden House to the French traders who used it as their business center. In that time, French traders could do business here without paying any taxes by a decree from the emperor Aurangzeb. In that time, the French became very wealthy by doing business here in competition with the English and other European companies. They made a big palace and dug a pond for sweet water in the newly purchased property. The pond still exists in the compound of Ahsan Manzil which was called “Les Jalla” in that time. In the English-French war, French got defeated and all their properties were captured by the English. On 22 June 1757, the French left the trading house with a fleet of 35 boats from the river station of Buriganga in front of Kumartuli.

In 1830, the trading house of Kumartuli was purchased by the established landlord of Dhaka, Khwaja Alimullah. After some renovation work, the trading house became the residence of Khwaja Alimullah. In his time, a stable and a family mosque was added in the compound. After his death, his son Khwaja Abdul Ghani made a great flourish to the property, and named it “Ahsan Manzil” after his son Khwaja Ahsanullah. In the east side of the old building, he made a new building with a different design, and also done great renovation work to the old building. Since then, the old building was called “Ondor Mohol” and the new building was called “Rong mohol”. 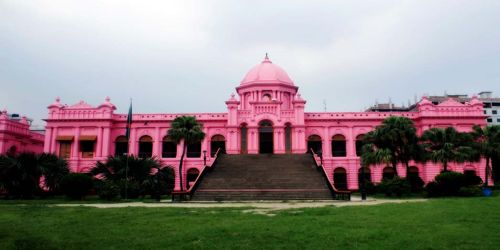 In the evening of 7th April 1888, a great tornado hit Dhaka city causing great damage. Ahsan Manzil was greatly damaged and abandoned. An English engineer from Kolkata arrived here to examine the palace. He gave the opinion that except the “Rangmahal”, all other parts of the palace have to be reconstructed. So Khwaja Abdul Gani and his son Ahsanullah turned their full attention to reconstruct the palace. Both of the building was reconstructed during that time with a new design made and supervised by the local engineer Gobinda Chandra Roy.

The old French building was reconstructed to a two storied building keeping similarity to the Rangmahal. A gangway was made with wood connecting the first floor of two building. The most beautiful thing made at this time was the doom, which made the palace so beautiful.

After the death of Khwaja Ahsanullah in 1901, the glory of Ahsan Manzil was ended. His successors couldn’t continue the glory for the internal family quarrel. They rented different parts of the palace to tenants, who actually made it a slum. In 1952 govt. acquired the property and left in the supervision of the Dhaka Nawab court. In 1985, Dhaka National Museum acquired the property and made it a museum.

Ahsan Manzil is one of the significant architectural monuments of the country. Established on a raised platform of 1 metre, the two-storied palace measures 125.4m by 28.75m. The height of the ground floor is 5 metres and that of the first floor 5.8 metres. There are porticos of the height of the ground floor, both on the northern and southern sides of the palace. An open spacious stairway has come down from the southern portico, extending upto the bank of the river through the front garden. There was once a fountain in the garden in front of the stairs, though it does not exist today. The spacious north and south verandas of both the floors rest on semicircular arches. The floor is covered with marble.

To construct the dome of Ahsan Manzil, the square room on the ground floor was given a round shape with brickwork in the corners. The room was then given an octagonal shape near the roof by squinches. This octagonal shape took the form of the drum of the dome. Finally, the kumud kali (buds of lotus) shaped dome was constructed by gradually slanting the eight corners to the peak. The dome is 27.13 m high from the ground.

The palace Ahsan Manzil is divided into two parts: the eastern side and western side. The eastern building with the dome is called the Rangmahal and the western side with the living rooms is called Andarmahal. The high octagonal dome is placed on the central round room. There is a large drawing room, card room, library, state room and two other guest rooms are located on the east side of the palace. The ballroom, the Hindustani room and few residential rooms are situated on the western side. A beautiful vaulted artificial ceiling, made of wood, decorates the drawing room and the Jalsaghar. A splendid dining hall and few smaller rooms are placed on the west part. The floors of the dining and darbar halls are decorated with white, green and yellow colored ceramic tiles. The famous store room, where the valuables of the nawabs used to be stored, was in the middle of the five rooms located in the western half of the ground floor. Along with those rooms a Darbar Hall or assembly hall and a chest room is also place there.

There are attractive wooden stairs in the room that is attached to the north of the domed room. The balusters were ornamented with vine leaves made of iron along the railing of the stairs. The wooden ceiling of the room, decorated with geometric designs, is very elegant. The verandas and rooms are covered with marble. The doorways are placed within semicircular arches. The thickness of the walls of the palace is about 0.78 meters. The doorways are placed within semicircular arches. The inner doors had multi-colored glasses and the exterior ones were of wood with designs. Wooden beams supported the roof of these rooms. The architecture and the decoration is one of a kind in whole Bangladesh.

Ahsan Manzil, an architectural treasure, witnessed many historical events of Bangladesh. From the last part of the 19th century to the initial years of Pakistan, the Muslim leadership of East Bengal emerged from this palace. The nawabs of Dhaka used to conduct their court affairs here as chief of the panchayet (village council) everyday. Many anti-Congress meetings were held here under the initiative of Nawab Ahsanullah, a staunch believer in Muslim separate identity. Almost all the Viceroys, Governors and Lieutenant Governors of British India who visited Dhaka spent some time at the Ahsan Manzil.

The construction of the famous dome of the Ahsan Mazil, which is at the center of the palace, took a lot tedious planning. The square room on the ground floor was built with a round shape and brickworks were done around the corners. To give the room an octagonal shape, squinches were given around the roof corners. The eight corners of the octagon was slanted gradually to make the dome look like the bud of a lotus (kumud kali). The peak of this dome is 27.13 m above the ground.

In 1874, Lord Northbrook, Governor General of India attended an evening function in the palace when he came to lay the foundation of a water works installed by Nawab Abdul Ghani. In 1888, Lord Dufferin also accepted the hospitality offered at Ahsan Manzil. In 1904 Lord Curzon, on a visit to East Bengal, stayed in this palace on 18 and 19 February to win public support for the proposed Partition of Bengal.

Almost all political activities of Nawab Khwaja salimullah centred round this palace. Ahsan Manzil was the cradle of the All India Muslim League. With the decline of the nawabs of Dhaka, Ahsan Manzil also started to decline. When in 1952 the Dhaka Nawab State was acquired under the East Bengal Estate Acquisition Act, it became impossible for the successors of the nawabs to maintain the palace due to financial constraints. Nawab Khwaja habibullah shifted his residence to Paribag Green House soon after the acquisition of the zamindari. The palace was on the verge of collapse in no time as successors rented out rooms without considering its dignity. Over the years illegal occupants turned the place into a filthy slum.

Recognizing the historical and architectural importance of the Ahsan Manzil, the government of Bangladesh took the initiative to renovate it. In 1985 Ahsan Manzil and its surroundings were acquired. The total area of acquired land was 5.65 acres. Out of that 0.68 acres from northern side was given to Dhaka City Corporation to establish a super market and 4.96 acres of land with the palace buildings remained for museum purpose. After the completion of the renovation work in 1992 under the supervision of the Directorate of Public Works and Architecture, it was brought under the control of Bangladesh national museum (20 September 1992), and it was turned into a Museum.