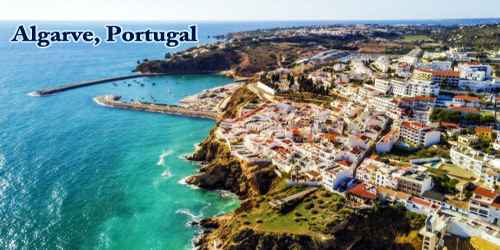 The Algarve (UK: /ælˈɡɑːrv, ˈælɡ-/, US: /ɑːlˈɡɑːrvə, ælˈ-/, Portuguese: alˈɡaɾvɨ, Arabic: الغرب‎, romanized: al-gharb (Algarbe), lit. ‘the west’), historical province of southern Portugal, bounded by the Atlantic Ocean (south and west) and the lower Guadiana River (east). Much of the interior upland region is of low productivity and is sparsely populated; the fertile coastal lowland is more densely inhabited. It has an area of 4,997 km2 (1,929 sq mi) with 451,006 permanent inhabitants and incorporates 16 municipalities.

There’s no shortage of prime quality beaches either. Sandy stretches as far because the eye can see, framed by golden cliffs, virtually deserted islands marking the boundary between Ria Formosa and also the sea, and little coves sheltered by the rocks. The ocean, in every shade of blue and mostly calm and warm, invites visitors or travelers for long swims and to fancy water sports. 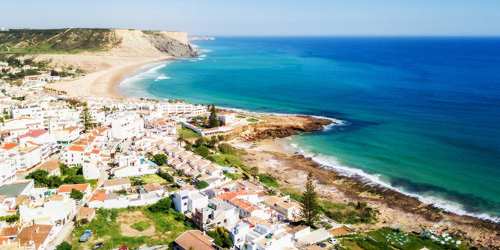 The region has its administrative center within the city of Faro, where both the region’s international airport (IATA: FAO) and public university, the University of Algarve, are located. The region coincides with Faro District. Tourism and related activities are extensive and frame the majority of the Algarve’s summer economy. Production of food, which incorporates fish and other seafood, differing kinds of fruit like oranges, figs, plums, carob beans, and almonds, are economically important within the region.

The Phoenicians established bases in the area, and the Romans later conquered it; Visigoths ruled the region until Muslims took control in the early 8th century. After nearly five centuries of Muslim rule, Algarve (Arabic: Al-Gharb, “the west”) was taken into the Portuguese kingdom in 1189, but it retains some of its Moorish characteristics. At Sagres in 1419 Henry, the Navigator founded a center of research that came to be called a school of navigation.

The region is divided into 16 municipalities. (A note about terminology: designations can be confusing even for the Portuguese, so don’t worry about whether the names that follow are districts, cities, counties (concelhos), or towns.

Loulé, a traditional Portuguese market town, is the largest municipality with a population of 70,000. It’s followed by Faro (65,000), home to an international airport, Portimão (56,000) where visitors or travelers will find Praia de Rocha, a stunning beach backed by ochre-hued cliffs, and Albufeira (41,000), a former fishing village with a busy marina and active nightlife.

The region contains a warm climate and various fine beaches, contributing to its popularity as a vacation destination. The economy is heavily captivated with tourism, which has vastly expanded in recent years and in significant ways altered the landscape. The building of hotels, apartment blocks, and residential housing has been extensive. Moreover, many golf links have also been created along the coast. Fishing (for sardines, horse mackerel, and other forms of fish) and fish processing continue, and other industries include wine and cork processing.

There are also the mountains, where people live in harmony with nature and maintain traditions that they love to share. And the cities. Silves preserves traces of its Arab past and Lagos from the time of the Discoveries. More cosmopolitan Portimão and Albufeira are bustling towns by night and day. Tavira is a showcase for traditional architecture and Faro, the gateway to the region deserves a long stop to discover its beautiful historic center.

Explore Albufeira’s Archeological Museum, with artifacts from the Stone Age through the Roman and Moorish occupations to the 17th century. Take a river cruise from Portimão to Silves, the former Moorish capital of the Algarve, which is nestled in a hillside surrounded by lemon and orange groves. Stroll cobbled streets and climb the castle ramparts.

The Algarve is one amongst the foremost developed regions of Portugal and, with a GDP per capita at 83% of the eu Union average; it’s the second-highest purchasing power within the country, standing only behind Lisbon. The most recorded temperatures within the Algarve fluctuate between 25 °C (77 °F) in winter and over 40 C in summer, with the temperature rarely falling below freezing within the winter. It’s rainiest in winter; of the 50 wet days a year the Algarve experiences, most occur between November and February.

The architecture reflects the region’s 500 more or less years of Moorish influence between the eighth and 13th centuries. Even the name, Algarve, derives from the Moorish Al Gharb (“western cape”). The towns are typical medieval historic centers with narrow, winding cobbled streets. The Algarve is legendary for its pottery and ceramics, particularly hand-painted pottery and azulejos, which are painted, tin-glazed ceramic tiles.

The Algarve has several cities, towns, and villages; the region’s capital is the city of Faro, while other cities include Albufeira, Lagoa, Lagos, Loulé, Olhão, Portimão, Quarteira, Silves, Tavira, and Vila Real de Santo António, in addition to various summer retreats such as Vilamoura, Praia da Rocha, Armação de Pêra, Alvor, Monte Gordo, Tavira, and Sagres. Traditional houses are white with yellow or blue borders and thick stone walls to protect from the summer heat. Layered into all this history are vestiges of the Roman Empire, including first-century Roman ruins like the ones outside Faro, at Estoi. The people are helpful and super-friendly. 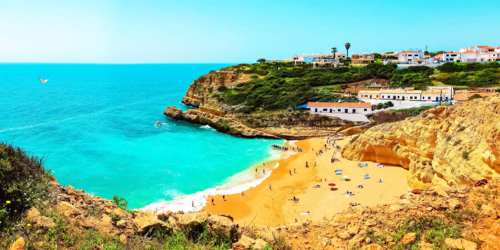 Tourist attractions within the region include its beaches, Mediterranean climate, safety, cuisine, and comparatively low prices. Well-known beaches within the Algarve include Marinha Beach, Praia da Rocha, and Armação de Pêra. a widely known spa town is Caldas de Monchique. Additionally to its natural features and beaches, the Algarve has invested within the creation of a network of golf courses. In 2018, the region’s income from tourism was over a billion euros; the quantity of tourists totaled 4.2 million. Tourism contributed €1.08 billion to the economy in this year.