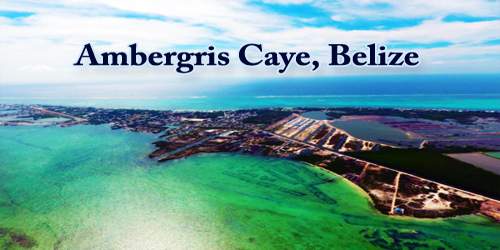 Ambergris Caye, pronounced /æmˈbɜːrɡrɪs ˈkiː/ am-BUR-gris KEE, in Belize is one of the country’s top tourist destinations and the largest of its 200 cayes. It is the largest island of Belize, located northeast of the country’s mainland, in the Caribbean Sea. It is about 40 kilometers (25 mi) long from north to south, and about 1.6 kilometers (1 mi) wide. Where it has not been modified by man, is mostly a ring of white sand beach around mangrove swamp in the center. Though administered as part of the Belize District, the closest point on the mainland is part of the Corozal District.

While its Caribbean beaches are generally better for fishing than swimming, thanks to their flourishing turtle grass flats, the magnificent Hol Chan Marine Reserve more than compensates with superb diving and snorkeling less than a half-mile from shore.

San Pedro Town is the only town on the island. Ambergris Caye has been the hub of the areas maritime trade for centuries. Fishing, coconuts, and chicle were historic means of islander’s support, but the last thirty years have led to a large growth in both the dive and scuba trade and ecotourism. The rich variety of things to do in San Pedro Town makes Ambergris Caye the gateway to travel in this beautiful country.

A Maya community lived on the island in Pre-Columbian times and made distinctive polished red ceramics. There are also a number of small villages and resorts. Two resorts north of San Pedro played host to the first season of Fox’s Temptation Island in 2000, aired in 2001. 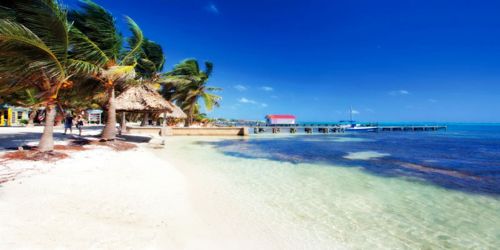 Ambergris Caye was first inhabited by the Maya as early as 200 B.C. It was the Maya who dug a canal on the north side of the Mexican peninsula, creating the island of Ambergris Caye. The Caye is 25 miles long, making it the largest “island” of the some 200 that lie off the coast of Belize.

Ambergris Caye is commonly referred to as the “Isla Bonita” (English translation: ‘The Beautiful Island’), after Madonna’s 1987 hit “La Isla Bonita” mentioned a place called San Pedro. (Madonna has said the song does not refer to any particular place.) Ambergris Caye is famous for the turquoise seascapes surrounding the island which matches the character and Caribbean charm of the destination. Because of the island’s small size, the main form of powered transportation is by golf cart.

Part of the island’s charm is its colorful town of San Pedro, where golf carts rule the streets, and funky restaurants showcase fresh seafood and Mexican-inspired cuisine. Since the northern part of the island lies a stone’s throw from Mexico, the island has a strong Mexican influence, and many locals speak Spanish.

More tourists and expats flock to Ambergris than any other region of Belize. Beyond its natural beauty and outdoor activities, this island offers Belize’s most sophisticated lifestyle. Combining a casual beach life with upscale amenities, it’s no wonder Ambergris has become so popular. The increase in tourism, infrastructure, and amenities has led to a cost of living that’s high-end for Belize, and real estate prices have been on an upswing since 2010.

Tourism development of Ambergris Caye began in the early 1970s and grew considerably in the later years of the 20th century. The main attractions are the Belize Barrier Reef and its beaches. That barrier reef is the second largest in the world, after the Great Barrier Reef of Australia.

One of the main reasons people come to Ambergris Caye is because of the gorgeous water. Just a 10-minute boat ride away from the shore is the reef, with ample snorkeling opportunities. You can see a vast array of tropical fish, rays, nurse sharks, and turtles. Or you can enjoy an exhilarating swim with a school of nurse sharks at Shark Ray Alley. Mexico Rocks is a slightly longer boat ride away, but it’s worth it as many visitors say they find it to be their favorite snorkel spot near the island.