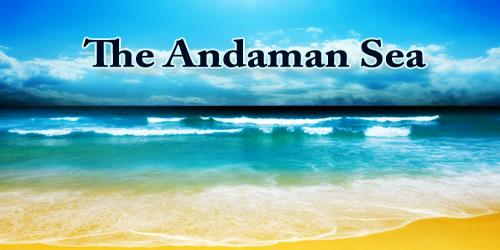 The Andaman Sea (historically also known as the Burma Sea) is a body of water to the southeast of the Bay of Bengal, south of Myanmar, west of Thailand and east of the Andaman Islands; it is a part of Indian Ocean. Its southernmost end is defined by Breueh Island, an island just north of Sumatra, and communicates with the Malacca Strait. The sea has been traditionally used for fishery and transportation of goods between the coastal countries and its coral reefs and islands are popular tourist destinations. The fishery and tourist infrastructure was severely damaged by the 2004 Indian Ocean earthquake and tsunami. 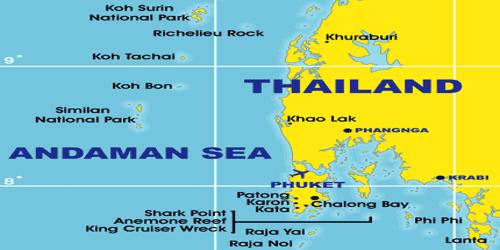 It is bounded to the north by the Irrawaddy River delta of Myanmar (Burma); to the east by peninsular Myanmar, Thailand, and Malaysia; to the south by the Indonesian island of Sumatra and by the Strait of Malacca; and to the west by the Andaman and Nicobar Islands, which constitute a union territory of India. Through such ports as Bassein, Mawlamyine, Tavoy, and Mergui as well as Yangon (Rangoon) itself it forms the most important sea link between Myanmar and other countries; it also forms part of a major shipping route between India and China, via the Strait of Malacca. The sea, which has an area of 308,000 square miles (798,000 square km), takes its name from the Andaman Islands. At its southeastern reaches, the Andaman Sea narrows to form the Straits of Malacca, which separate the Malay Peninsula from the island of Sumatra.

On the Southwest. A line running from Oedjong Raja in Sumatra to Poeloe Bras (Breuëh) and on through the Western Islands of the Nicobar Group to Sandy Point in Little Andaman Island, in such a way that all the narrow waters appertain to the Burma Sea.

On the Northwest. The Eastern limit of the Bay of Bengal; A line running from Cape Negrais (16°03’N) in Burma through the larger islands of the Andaman group, in such a way that all the narrow waters between the islands lie to the Eastward of the line and are excluded from the Bay of Bengal, as far as a point in Little Andaman Island.

On the Southeast. A line joining Lem Voalan in Siam (Thailand), and Pedropuntin Sumatra.

Out of these, the most important straits (in terms of width and depth) are: Preparis Channel (PC), Ten Degree Channel (TDC), and Great Channel (GC). PC is the widest but shallowest (250 m) of the three and separates south Myanmar from north Andaman. TDC is 600 m deep and lies between Little Andaman and Car Nicobar. GC is 1,500 m deep and separates Great Nicobar from Banda Aceh.

Southeast Asia’s monsoonal regime governs the sea’s climate and water chemistry. In the winter the regional humidity is low, the sea receives little rainfall or runoff, and hence its surface salinities are high. Huge volumes of runoff water from Myanmar flow into the Andaman Sea during the summer monsoon, however, forming a marked pattern of low surface salinity in its northern third. Neither the Andaman’s surface waters nor its bottom are rich in marine life. Its waters along the Malay Peninsula, however, favor molluscan growth, and there are about 250 edible species of fish in those intensively fished coastal waters. The sea’s mineral resources are similarly limited but include tin deposits off the coasts of Malaysia and Thailand.

The andaman sea is with a good reason one of the top 50 dive sites in the world, why? Simple because the encouters in this waters are just amazing like the country part of the andaman sea belongs to, thailand.

With the group of similand island national park and marine santuary, the dives in this areas are spectacular and unpredictable, whale sharks manta rays and different kinds of shark easly are spotted here, plus a huge quantities of tropical fishes coral formations and so on.

Running in a rough north-south line on the seabed of the Andaman Sea is the boundary between two tectonic plates, the Burma Plate and the Sunda Plate. These plates (or microplates) are believed to have formerly been part of the larger Eurasian Plate but were formed when transform fault activity intensified as the Indian Plate began its substantive collision with the Eurasian continent. The boundary between two major tectonic plates results in high seismic activity in the region (see List of earthquakes in Indonesia). Numerous earthquakes have been recorded, and at least six, in 1797, 1833, 1861, 2004, 2005, and 2007, had a magnitude of 8.4 or higher.

On 26th December 2004, a severe earthquake (magnitude 9.1) off the west coast of Sumatra triggered a large tsunami that inundated coastal areas throughout the Andaman Sea region. The initial quake was followed by a series of aftershocks along the arc of the Andaman and Nicobar Islands.

Trading vessels have plied the Andaman Sea since ancient times. It was part of the early coastal trade route between India and China and, from the 8th century, formed a link in a thriving trade between India and Sri Lanka (Ceylon) to the west and the Myanmar ports of Thaton, Martaban, and Tavoy to the east. The two largest modern ports on the sea are George Town (Malaysia) to the southeast and Yangon (Myanmar) to the north. 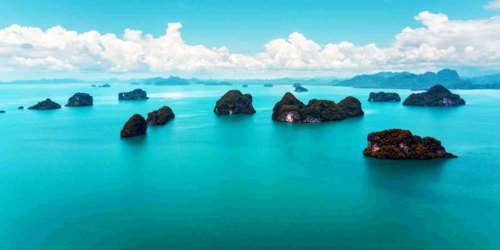 The Andaman Coast is a convenient base for exploring the spectacular islands of the Andaman Sea. These lush limestone peaks rise from turquoise waters, creating one of the planet’s most striking seascapes. Famous isles include the Phi Phi Islands such as Ko Phi Phi Don, with its many resorts, and Ko Phi Phi Leh, where the Leonardo DiCaprio movie The Beach was filmed. These islands are on the popular Phuket Day Trip circuit. Phang Nga Bay is home to more than a hundred of these emerald beauties, including the famous James Bond Island.