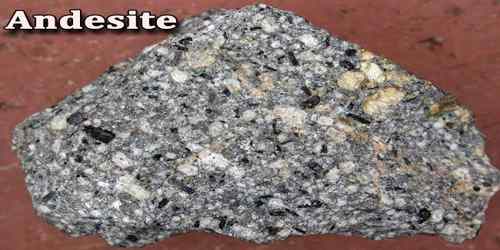 Andesite is a gray, fine-grained volcanic rock. Andesite consists mainly of sodium-rich plagioclase and one or more mafic minerals such as biotite, hornblende, or pyroxene. It often contains small, visible crystals (phenocrysts) of plagioclase. It is the fine-grained equivalent of diorite. In a general sense, it is the intermediate type between basalt and granite, and ranges from 57 to 63% silicon dioxide (SiO2) as illustrated in TAS diagrams. The mineral assemblage is typically dominated by plagioclase plus pyroxene or hornblende. Magnetite, zircon, apatite, ilmenite, biotite, and garnet are common accessory minerals. Andesite usually does not contain quartz or olivine. It is typically found in lava flows produced by stratovolcanoes. Because these lavas cooled rapidly at the surface, they are generally composed of small crystals. The mineral grains are usually so small that they cannot be seen without the use of a magnifying device.

Andesite is considered intermediate in terms of its color (shades of gray and brown) and its chemistry (around 50 to 60 percent silica), and generally uniformly fine-grained with some slightly larger crystals called phenocrysts within it. Its magmas aren’t highly explosive or highly viscous. It isn’t as dark as basalt or as silica-rich as rhyolite, and it doesn’t have extreme variations in grain size that some pumices have. Andesite is a comfortably average igneous rock.

Occurrences, Production and Formation of Andesite

The name ‘Andesite’ is derived from the South American Andes Mountains where the rock was originally discovered. However, the rock forms from subduction zones all around the world. These zones can be found in Central America, Mexico, Japan, Indonesia, the Philippines, New Zealand, the US Pacific Northwest, and the Caribbean alike. Mines all over the world work to cultivate the rock and extract it from its natural deposits. Many commercially viable Andesite mines are found across Central America, Europe, and Southern Asia. Our Earth’s natural surface is predominately Andesite, so the supply will likely never run out. Andesite has proven time and time again to be one of our most readily useful and plentiful natural resources.

Andesite is typically formed at convergent plate margins but may also occur in other tectonic settings. Intermediate volcanic rocks are created via several processes:

Andesite rocks will form in regions above subduction zones. This formation usually occurs after oceanic plates melt amid the subduction zone, as the melting serves as a source of magma. Quartz is among the most common elements to be found in Andesite.

Occasionally, andesites contain large, visible grains of plagioclase, amphibole, or pyroxene. These large crystals are known as “phenocrysts.” They begin forming when a magma, which is cooling at depth, approaches the crystallization temperature of some of its minerals. When the magma erupts onto the Earth’s surface, the rest of the melt crystallizes quickly. This produces a rock with two different crystal sizes: large crystals that formed slowly at depth, and small crystals that formed quickly at the surface. “Andesite porphyry” is the name used for these rocks with two crystal sizes. Some magma that produces volcanic eruptions above subduction zones contains enormous amounts of dissolved gas. These magmas can contain several percent dissolved gases by weight. This gas can have several origins, examples of which include the following:

Many volcanic plumes and ash eruptions occur when gas-charged andesitic magmas erupt. The gas pressure that causes the eruption blows large amounts of tiny rock and magma particles into the atmosphere. These particles can be blown high into the atmosphere and carried long distances by the wind. They often cause problems for aircraft operating downwind from the volcano. In the modern world, much like Basalt, we use Andesite for many construction purposes, including aggregated gravel for roadbeds. Andesite also used in famous statues and monuments around the world. Many artifacts found in ancient temples and monuments, including the famous ‘Head of Buddha’ found in the Indonesian Mountains, and are made from Andesite. This rock also has a resistance against slipping, which makes it an excellent choice for floor tiling work.