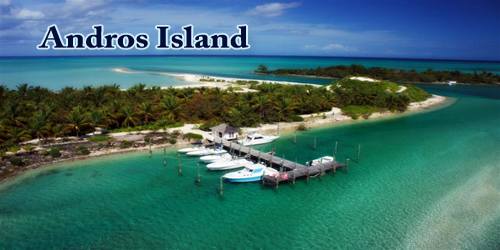 Andros Island, the largest island of The Bahamas, West Indies, which consists of more than 700 islands. The land area of Andros consists of hundreds of small islets and cays connected by mangrove estuaries and tidal swamplands, together with three major islands: North Andros, Mangrove Cay, and South Andros. The three main islands are separated by “bights”, estuaries that trifurcate the island, connecting the island’s east and west coasts. It lies 25 miles (40 km) west of New Providence Island and about 125 miles (200 km) east-southeast of the U.S. state of Florida.

The sparsely populated Andros is laced with creeks and has a densely forested inland. The island’s western coast is still largely uninhabited and is home to the West Side National Park. The island’s vast wetlands create channels, which are prime boating and fishing areas. Fly fishing is big here, and Andros is often called “the bone-fishing capital of the world.”

Noteworthy for a unique combination of marine features and ecosystems, Andros is bordered on the east by the 2,000-metre-deep (6,600 ft) Tongue of the Ocean. The Andros Barrier Reef is the world’s sixth longest. It runs for 225 km (140 mi), averaging a distance of 2–3 km (1–2 mi) from the Andros shore. The extensive flats of the Great Bahama Bank lie to the west, northwest and south of Andros. The island has the world’s largest collection of blue holes. 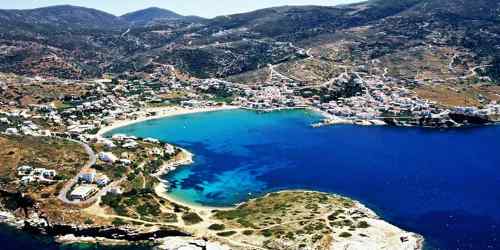 A flat, heavily forested island, Andros extends about 100 miles (160 km) from north to south and spans about 45 miles (70 km) from east to west at its widest point. Although the island has a distinct outline, it is highly fragmented, with many bays, inlets, lakes, cays, and channels, and is technically an archipelago. Just off the east coast is one of the largest barrier reefs in the world. Andros has only a small population and only moderate tourism, and the people tend to live in scattered settlements, the chief towns being Nicholls Town, Andros Town, and Kemps Bay, all on the east coast. Fruit and vegetable agriculture and fishing are the island’s economic mainstays, supplemented by a growing tourist industry and some packinghouses. A batik industry exists at Andros Town. Area 2,300 square miles (5,957 square km). Pop. (2000) 7,686; (2010) 7,490.

Geographically, North Andros is the sixth largest island in the West Indies, at roughly 6,000 km2 (2,300 sq mi) in area and 167 km (104 mi) long and 64 km (40 mi) wide at its widest point, and the 153rd largest island on Earth. If all three main islands are included, Andros is the fifth-largest island in the West Indies, after Cuba, Hispaniola, Jamaica and Puerto Rico. Although comparable in total area to the state of Rhode Island (3140 km2, population 1.05 million) together with Long Island, New York (3600 km2, population 7.5 million), Andros only has a population of approximately 8000, almost all of whom are settled in a thin strip near the Queen Elizabeth Highway running along the island’s eastern coast.

The eastern coast of Andros island is home to more than half the population centralized in 3 main towns: Nicholl’s Town, Andros Town (aka Fresh Creek), and Congo Town. There also are a number of Mennonite missions, a few small resorts, and the Atlantic Undersea Test and Evaluation Center (AUTEC) a NATO base run by the US Navy. Although Andros is roughly 200 miles off the coast of Florida, the language and culture are distinctly different from the United States. Virtually untouched by the tourism industry common to other Bahamian islands, Andros remains a rural area characterized by small tightly-knit communities.

Andros is known in the Bahamas by two nicknames, “The Sleeping Giant” and “The Big Yard”. The history of Andros includes a colorful array of farming, fishing, sponging, and logging, Arawak, Lucayan, and Seminole Indians, European explorers and colonizers, slaves, pirates, bootleggers, and smugglers.

The economy on Andros consists of the sponging industry, sport fishing, tourism and diving, wood carving, basket weaving and the production of Batik fabric (Androsia). Androsia is a distinct, bright fabric that is created through a unique process involving hand carved stamps and hot wax. Tourism is Andros Island’s largest industry, and the largest private employer. The Bahamian tourism industry markets Andros as the least-explored island in the chain. From Nicholls Town in the north to Little Creek in the south are 35–40 hotels, motels, resorts, guest houses and lodges (the number varies), with a total of approximately 400 rooms. Tourists are composed primarily of scuba divers, attracted to the barrier reef, Tongue of the Ocean, and the Blue Holes; bone-fishing anglers, and others looking for relaxation.

Andros Island is surrounded by thousands of square kilometers of fishable flats, home to permit, tarpon, and especially bonefish. The island is known as the bonefish capital of the world. Bonefish are considered among the world’s premiere game-fish for anglers. Other varieties of fishing are available on Andros. Deep sea fishing beyond the reef in the Tongue of the Ocean offers dorado, tuna, sailfish, wahoo, and jacks. Locals fish regularly on the reef for abundant snapper and grouper. Andros sponsors a number of festivals: Crab-fest at Fresh Creek each June, the annual regatta at Morgan’s Bluff, Conch Festival, a local Junkanoo and Goombay festival between Christmas and New Year’s, the Pirates’ Festival, and the Annual Seafood Splash & Chickcharnie Festival. In addition, ANCAT sponsors numerous ecologically oriented events for tourists and locals.

Andros also has the largest protected area in the Bahamas with five national parks. Nature lovers will appreciate the rich bird life in the mud flats, mangrove swamps, and forests, as well as the island’s eco-resorts. In addition to all these natural attractions, tourists can visit the Androsia Hand Made Batik Factory, which sells brightly-colored fabrics featuring bold Bahamian motifs.

Andros Island is home to several species of lizards, including the Andros Island iguana (Cyclura cychlura cychlura), a large endangered subspecies of Northern Bahamian rock iguana. The Andros Island iguana is listed as an Endangered species and can be found on the IUCN Red List, with a wild population of 3,500 individuals remaining on the island. Andros is a subtropical island with at least five distinct vegetation zones. Savannah, coppice, swash, and mangrove areas are all accessible for field studies. In both wetland and forested areas, over 200 endemic and North American birds have been included in long-term bird counts.

Reptiles include the endangered Bahamian boa, several different species of Caribbean Sea turtles, and a variety of anoles. In the summertime, look for land crabs. Four species of turtles are found in Andros’ waters: loggerhead, green, hawksbill and, rarely, the leatherback. Along the coast, compare the rocky shores to the white sand beaches and ask to visit some excellent invertebrate tide-pooling areas.

The barrier reef and the Tongue of the Ocean, together with mangrove swamps, rocky tidal pools, and estuaries, provide breeding and growing habitats for a wide variety of young marine life. Andros has a variety of close-to-shore and on-shore ecosystems that may be unique on Earth: tidal inland and ocean blue holes, shallow sand and mud flats, tidal estuaries, mangrove swamps, the pelagic ecozone of the 2,000 m (6,000 ft) drop-off only 1.6 km (1 mi) from shore, the world’s third-largest barrier reef, and huge freshwater aquifers. The marine biosphere is fed by both the teeming life of the mangrove marshes and estuaries on the mainland, and the upwelling of cool water from the Tongue of the Ocean, resulting in an unparalleled variety of sea life. Humpback whales, which are found in all the world’s oceans, follow a regular migration route, summering in temperate and polar waters for feeding, and wintering in tropical waters for mating and calving. Humpbacks used to be common in the Tongue of the Ocean off Andros, and are still seen infrequently. Pilot whales are also seen off the coast of Andros.

More than 50 species of wild orchids thrive in the subtropical forests and the wetlands of Andros. Commercial flower collectors have been known to set fire to the pineland coppices to collect the sharp-petaled bletias that flourish in ashy soil. The orchid genus Epidendrum has nine species endemic to the Bahamas, all of which can be found on Andros. Geologists are attracted to many features in the Bahamas, including the thick limestone foundation of the island, dramatically cut by deep channels. The geology and topography of the island is distinctive, with 178 inland and 50 oceanic blue holes and a network of underwater caves.

Most resident bird species of the Bahamas are believed to have come northward from the West Indies, as winds and sea currents favour migration from the south and southeast. Some 225 species are known in the islands. According to local lore, two mythical creatures are endemic to Andros: the Lusca and the Chickcharney (also spelled “Chickcharnie”.) The Lusca, half-octopus, half-shark and gigantic, supposedly swallows whole boats. The Chickcharney, furry and feathered and 1 m (3 ft) tall, has one red eye and three-toed claws. A man from Oregon believes that the legend of the chickcharney is based on the prehistoric barn owl Tyto pollens, although remains have never been found on Andros and the youngest fossil bones are from a layer before the arrival of the first humans, the Lucayans.

The Andros reef is the third largest fringing reef in the world, second only to Australia and Belize, and is considered by many to be the most diverse and pristine. The reef has both fringing and barrier characteristics and supports a colorful and amazing diversity of life. The reef is 190 miles long, drops to about eight feet on the island side and plunges to more than 6,000 feet in the Tongue of the Ocean. It is unique in the region because of its size, lush coral growth, and minimal coral disease. It offers a tremendous variety of 10 to 25 foot deep gardens abloom with both hard and soft corals, some of which emerge from the seas at low tide. 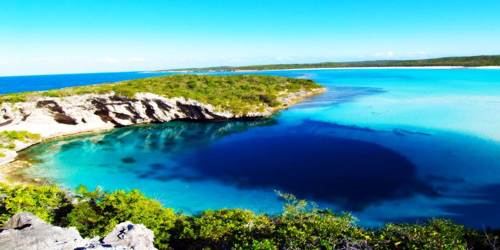 Andros has a vast number of ocean and inland blue holes, the highest concentration and largest variety of any solid landmass in the world. They are home to unique cave fish and invertebrates, some not found anywhere else. Andros has 178 on land with at least 50 in the sea. Blue holes can best be described as entrances to the intricate cave systems that run underneath the island and sea floor. Their openings can be found among the shallow creeks, inland lakes, and the shallow banks of the Bahamas. The caves, which have developed within the Bahamian carbonate platforms, can be laterally and vertically very extensive. Lateral cave passages can extend to several kilometers and vertically may range in depth from ten to several hundred meters.