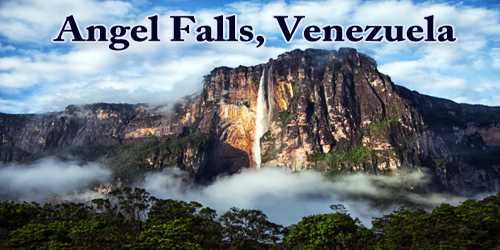 Angel Falls, Spanish Salto Ángel, also called Salto Churún Merú (Pemon language: Kerepakupai Meru meaning “waterfall of the deepest place”, or Parakupá Vená, meaning “the fall from the highest point”), a waterfall in the Guiana Highlands in Bolívar state, southeastern Venezuela, on the Churún River, a tributary of the Caroní, 160 miles (260 km) southeast of Ciudad Bolívar. It is the world’s highest uninterrupted waterfall, with a height of 979 metres (3,212 ft) and a plunge of 807 m (2,648 ft).

The waterfall drops over the edge of the Auyán-tepui mountain in the Canaima National Park (Spanish: Parque Nacional Canaima), a UNESCO World Heritage Site in the Gran Sabana region of Bolívar State. The height figure 979 m (3,212 ft), mostly consists of the main plunge but also includes about 400 metres (1,300 ft) of sloped cascade and rapids below the drop and a 30-metre (98 ft) high plunge downstream of the talus rapids.

It leaps from a flat-topped plateau, Auyán-Tepuí (“Devils Mountain”), barely making contact with the sheer face. The falls are located in Canaima National Park, and, because of the dense jungle surrounding the falls, they are best seen from the air. 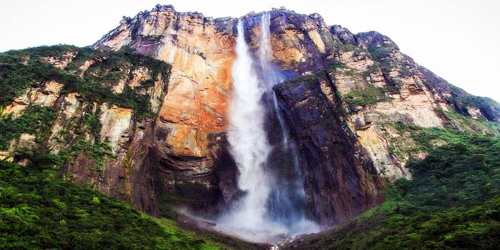 The name “Angel Falls” was given by a Venezuelan in honor of Jimmie Angel, an American aviator who discovered this waterfall in 1937 when he flew over it with his small plane. The common Spanish name Salto Ángel derives from his surname. Angel’s ashes were scattered over the falls on 2nd July 1960. This waterfall was one of the 28 finalists in the choice of the Seven Natural Wonders of the World.

In 2009, President Hugo Chávez announced his intention to change the name to the purported original indigenous Pemon term (“Kerepakupai Vená”, meaning “waterfall of the deepest place”), on the grounds that the nation’s most famous landmark should bear an indigenous name. Explaining the name change, Chávez was reported to have said, “This is ours, long before Angel ever arrived there… this is indigenous land.” However, he later said that he would not decree the change of name, but only was defending the use of Kerepakupai Vená.

Although this waterfall is one of the most-visited tourist attractions in the country, it is difficult to access, since the trip is quite complicated. As the area is surrounded by a dense forest, the only way to get there is by taking a small plane from the country’s capital or from Ciudad Bolivar.

The official height of the falls was determined by a survey carried out by an expedition organized and financed by American journalist Ruth Robertson on 13th May 1949. Robertson’s expedition, which began on 23rd April 1949, was also the first to reach the foot of the falls. The first known attempt to climb the face of the cliff was made in 1968 during the wet season. It failed because of slippery rock. In 1969, a second attempt was made during the dry season. This attempt was thwarted by a lack of water and an overhang 120 meters (400 ft) from the top. The first climb to the top of the cliff was completed on 13th January 1971. The climbers required nine and a half days to ascend and one and a half days to rappel down.

Open to tourism for barely 20-odd years, this is still one of the most unspoiled natural wonders of our planet, and the falls’ remoteness ensures it will stay this way for many, many years to come. The peskiness of its location also means that as far as attractions in South America go, Angel Falls is still among the least visited. Everyone knows about Angel, everyone wants to see it, but when a place requires a little bit of effort and a bit of sweat to reach, there simply aren’t that many who eventually do.

Angel Falls is one of Venezuela’s top tourist attractions, though a trip to the falls is a complicated affair. The falls are located in an isolated jungle. A flight from Puerto Ordaz or Ciudad Bolívar is required to reach Canaima camp, the starting point for river trips to the base of the falls.

The best time to see the falls at its fullest is during the rainy season, in the months between May and November. It is during these months that visitors can reach the base of the falls by boat, an experience that feels much more like a true-blue adventure, rather than a simple tourist excursion.

Pixar used this waterfall as an inspiration for their animated film ‘Up’, where the protagonist tries to take his house to the top of the ‘Paradise Falls’, in a clear allusion to ‘Angel Falls’.