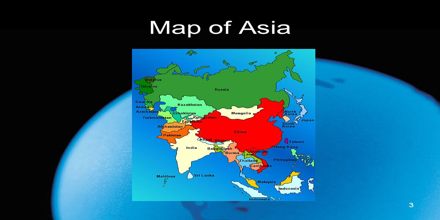 This lecture introduce on Asia: Continent Series. Asia is the largest and most populous continent in the world, sharing borders with Europe and Africa to its West, Oceania to its South, and North America to its East. Asia is a Largest continent and 30% of the earth’s surface. Over 4 billion in population in this area. Asia is home to 3 of the world’s largest cold deserts: Chang Tang, on the Plateau of Tibet in China; Taklimakan Desert and Gobi (Mongolian for “waterless place”).