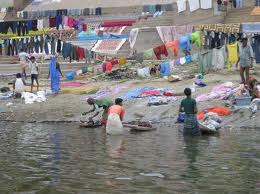 Assignment on River Pollution in Bangladesh

It was once the lifeline of the Bangladeshi capital. But the once mighty Buriganga river, which flows by Dhaka, is now one of the most polluted rivers in Bangladesh because of rampant dumping of industrial and human waste.

“Much of the Buriganga is now gone, having fallen to ever insatiable land grabbers and industries dumping untreated effluents into the river,”

“The water of the Buriganga is now so polluted that all fish have died, and increasing filth and human waste have turned it like a black gel. Even rowing across the river is now difficult for it smells so badly,” he told reporters.

The plight of the Buriganga symbolises the general state of many rivers in Bangladesh, a large flat land criss-crossed by hundreds of rivers which faces an uphill battle to keep them navigable and their water safe for human and aquatic lives.

Bangladesh has about 230 small and large rivers, and a large chunk of the country’s 140 million people depend on them for a living and for transportation.

But experts say many of them are drying up or are choked because of pollution and encroachment.

Unabated encroachment that prevents the free flow of water, dumping of medicinal waste and waste of river passengers have compounded the problem, making the water unusable for humans and livestock.

“Unfortunately, all these bad things — encroachment, dumping of industrial waste and other abuses — occur in full knowledge of the authorities,” said Professor Abdullah Abu Saeed, an eminent campaigner for “Save Buriganga, Save Lives”.

Among the top polluters are dozens of tanneries on the banks of the Buriganga. The government recently initiated a move to relocate the tanneries outside the capital, and also asked illegal encroachers to vacate the river.

But environmental groups say they defy such orders by using their political links or by bribing people.

One of the Tanary of Bangladesh. In this photo because of the tanary waste the river near it has become polluted and its colour has turned into black.

Environmentalists say the Buriganga, or the “Old Ganges” once famous for a spectacular cruise, is worst affected.

The river flows by the capital Dhaka, a city of 12 million people, which largely depends on the Buriganga’s water for drinking, fishing and carrying merchandise.

“The pollutants have eaten up all oxygen in the Buriganga and we call it biologically dead. It is like a septic tank,”

“There is no fish or aquatic life in this river apart from zero oxygen survival kind of organisms.”

Chemicals such as cadmium and chromium, and other elements such as mercury carried by the industrial waste are also creeping into the ground water, posing a serious threat to public health.

“If the pollution is not controlled, we will face a serious health crisis in a year or two or at best three years,”

Bangladesh enacted a law in 1995 making it compulsory for all industrial units to use effluent treatment plants in a bid to save river waters from pollution, but industry owners often flout the rule.

“Many of them have this plant. But they don’t use it as it is expensive.”

“We want the rivers fully dredged, their illegal occupation ended and the laws strictly enforced to prevent abuse of waterways,”

Environmentalists say they are hopeful.

“Not many days ago Singapore River was also like our Buriganga. But they cleaned it up and now turned it into a great resource,”

Ways to reduce pollution in Bangladesh Bangladesh is a very polluted country. The result of this pollution is our polluted river Buriganga. Many factories are made near the river to dump the noxious waste they have produced. By doing this the river becomes dirty and the aquatic animals die. Even it is harmful to our lives too. Because some people drink and bath  from the same water.

So to prevent this from happening we have to start purification. By doing this we can purify [make something clean] the waste water coming out of the factory into fresh water.

Polithin is a big cause of pollution in our country. Many people in our country uses polithin. It is an nondigradable pollution. It means it cannot decompose by itself. Our country has so many polithin waste that it can cover the whole London by polithin.