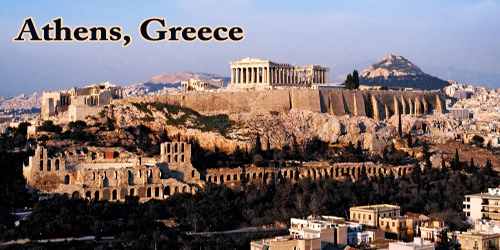 Athens (/ˈæθɪnz/ ATH-inz; Greek: Αθήνα, romanized: Athína (aˈθina); Ancient Greek: Ἀθῆναι, romanized: Athênai (pl.) (atʰɛ̂ːnai̯)) is a historic city and capital of Greece. Many of Classical civilization’s intellectual and artistic ideas originated there, and the city is generally considered to be the birthplace of Western civilization. Athens dominates the Attica region and is one of the world’s oldest cities, with its recorded history spanning over 3,400 years and its earliest human presence started somewhere between the 11th and 7th millennium BC.

Athens is the historical capital of Europe, with a long history, dating from the first settlement in the Neolithic age. In the 5th Century BC (the “Golden Age of Pericles”) the culmination of Athens’ long, fascinating history the city’s values and civilization acquired a universal significance. Over the years, a multitude of conquerors occupied Athens and erected unique, splendid monuments a rare historical palimpsest. In 1834, it became the capital of the modern Greek state and in two centuries since it has become an attractive modern metropolis with unrivaled charm.

A large part of the town’s historic center has been converted into a 3-kilometer pedestrian zone (the largest in Europe), leading to the major archaeological sites (“archaeological park”), reconstructing to a large degree the ancient landscape. 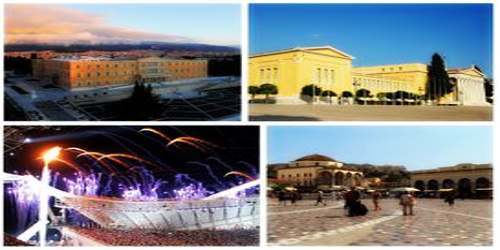 The heritage of the classical era is still evident in the city, represented by ancient monuments and works of art, the most famous of all being the Parthenon, considered a key landmark of early Western civilization. The city also retains Roman and Byzantine monuments, as well as a smaller number of Ottoman monuments. Athens is home to two UNESCO World Heritage Sites, the Acropolis of Athens and the medieval Daphni Monastery. Landmarks of the modern era, dating back to the establishment of Athens as the capital of the independent Greek state in 1834, include the Hellenic Parliament and the so-called “architectural trilogy of Athens”, consisting of the National Library of Greece, the National and Kapodistrian University of Athens and the Academy of Athens. Athens is also home to several museums and cultural institutions, such as the National Archeological Museum, featuring the world’s largest collection of ancient Greek antiquities, the Acropolis Museum, the Museum of Cycladic Art, the Benaki Museum and the Byzantine and Christian Museum. Athens was the host city of the first modern-day Olympic Games in 1896, and 108 years later it hosted the 2004 Summer Olympics, making it one of the few cities to have hosted the Olympics more than once.

Athens lies 5 miles (8 km) from the Bay of Phaleron, an inlet of the Aegean (Aigaíon) Sea where Piraeus (Piraiévs), the port of Athens, is situated, in a mountain-girt arid basin divided north-south by a line of hills. Greater Athens has an area of 165 square miles (427 square km). The Kifisós River, only a trickle in summer, flows through the western half; the Ilisós River, often dry, traverses the eastern half. The surrounding mountains Párnis, 4,636 feet (1,413 meters); Pentelicus (Pendéli), 3,631 feet; Hymettos (Imittós), 3,365 feet; and Aigáleon, 1,535 feet add to the impression of barrenness. Yet such considerations are superficial when compared with the fecundity of Athens’s bequests to the world, such as its philosophy, its architecture, its literature, and its political ideals.

Athens has a hot-summer Mediterranean climate (Köppen climate classification: Csa). The dominant feature of Athens’ climate is an alternation between prolonged hot and dry summers and mild winters with moderate rainfall. With an average of 455 millimeters (17.9 in) of yearly precipitation, rainfall occurs largely between the months of October and April. July and August are the driest months when thunderstorms occur sparsely. Furthermore, some coastal areas of Athens, known as the Athens Riviera have a hot semi-arid climate (BSh) according to the climate atlas published by the Hellenic National Meteorological Service (H.N.M.S).

Some three centuries after the death of Pericles (429 BCE), Athenians entered upon a period of bondage that lasted almost 2,000 years. The city was freed in 1833, and in the following 170 years, it was the scene of more than a dozen revolutions, another brutal foreign occupation, and a civil war of especial savagery. This long history of passion and suffering has had a considerable effect on the Athenian character. The core of that character is an implacable will to survive, buttressed by a profound sense of loyalty (especially to the family) and patriotism. The Greek Orthodox Church, which is directed by a synod sitting in Athens, was the main force in keeping alive the Greek language, tradition, and literature when such things were forbidden, and most people still support it.

The millennia of oppression, instead of driving the Athenians into obtuse moroseness, have honed their wit and rendered them tough but supple, while centuries of privation have only preserved their warmth and generosity. The long oral tradition, alive even under the invader, has reflected and stimulated a taste for rich talk. Of course, the poetic impulse to make a good story better leads to considerable exaggeration in daily conversation, suiting a vanity that goes with a sharp-edged sense of personal and family honor and the spoiling of children. The ancient heroes, too, were vain about both themselves and honor, boasting as much about outwitting the enemy as about outfighting him.

Birthplace of philosophy, democracy, and drama, the city of Athens is not only an open-air museum of world-class cultural heritage attractions but also a contemporary metropolis with an urban personality. Named after the most benevolent Greek Goddess, Athena, the goddess of wisdom and inspiration, Athens has always been at the cultural fore.

With equal measures of grunge and grace, Athens merges the past with the present in the most slender way! A city of paradoxes and great contrasts, in the country that first invented the courtesy and generosity towards people who are far from their home, hospitality (xenia).

An intellectual beacon of the ancient world with spectacular Mediterranean landscapes bathed in the renowned light, Athens is a sophisticated cosmopolitan hub with delicious gastronomic delights, electrifying nightlife, creative vibes, and a booming art scene.

The hills of Athens also provide green space. Lycabettus, Philopappos hill, and the area around it, including Pnyx and Ardettos hill, are planted with pines and other trees, with the character of a small forest rather than typical metropolitan parkland. Also to be found is the Pedion tou Areos (Field of Mars) of 27.7 hectares, near the National Archaeological Museum.

Athens’ largest zoo is the Attica Zoological Park, a 20-hectare (49-acre) private zoo located in the suburb of Spata. The zoo is home to around 2000 animals representing 400 species and is open 365 days a year. Smaller zoos exist within public gardens or parks, such as the zoo within the National Garden of Athens.

From the iconic Acropolis, rising above the city, to charming up and coming neighborhoods and contemporary art galleries, the city of Classic Marathon and Olympic Games is a majestically quirky clash of past and present.

Hip and fun accommodations are scattered throughout the districts, so visitors/travelers will be able to stay where they feel most comfortable and still have easy access to the best sites in Athens. Obviously the Acropolis can’t be missed, but there are so many other historic sites that should make it on their itinerary, like the Parthenon and the Temple of Olympian Zeus.

Since World War I Athens has become the hub of all mercantile business, export, and import. With Piraeus, it is the most important manufacturing city in Greece. Athens accounts for half of the jobs in industry and handicrafts, and earnings are much higher than the national average. There are cloth and cotton mills, distilleries, breweries, potteries, flour mills, soap factories, tanneries, chemical works, and carpet factories. Exports include olive oil, tomato products, wine, cement, bauxite, and textile manufactures. Publishing enterprises are important.

Tourism is also a great contributor for the economy of the city, which is considered as one of the top destinations in Europe for city-break tourism and is also the gateway for excursions to the islands or the mainland. Greece attracted 26.5 million visitors in 2015, 30.1 million visitors in 2017 and over 33 million in 2018, making Greece one of the most visited countries in Europe and the world, and contributing 18% to the nation’s Gross Domestic Product. Athens welcomed more than 5 million tourists in 2018 and 1,4 million of them were “city-breakers” (in 2013 the city-breakers were only 220.000).